Dennis A. Beaudry’s newly released “THE STATE OF CHRISTIANITY” is a compelling contemporary fiction with layers of encouragement of faith

“THE STATE OF CHRISTIANITY” from Christian Faith Publishing author Dennis A. Beaudry is an engaging tale of dedicated followers of Christ and the modern challenges faced on the path to living in agreement with God’s plan. 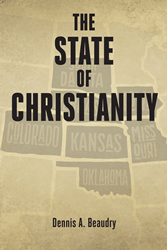 “THE STATE OF CHRISTIANITY”: a captivating fiction that takes on real world struggle. “THE STATE OF CHRISTIANITY” is the creation of published author Dennis A. Beaudry, who is originally from Monroe, Michigan. Beaudry is a retired Air Force master sergeant who served as a personnel specialist, technical instructor, historian, and career advisor during his twenty-six-year military service career. After retiring, he was employed with The Ohio State University in various data entry positions. Beaudry married his hometown sweetheart, Linda, and has two adult children and four grandchildren. He resides in Columbus, Ohio.

Beaudry shares, “The State of Christianity takes a prophetic look at the body of Christ and America and where the two of them are heading. Ever-increasing onslaughts against the church from various entities results in legislation that restricts Christians from accomplishing their work as commissioned by Christ. But true Christians become repulsed by the blight of a decaying society and frustrated with their failure to reverse the nation’s moral decline. They never give up nor succumb to the forces of opposition. Instead, they seek God’s direction for an alternative plan, which comes as an exodus of sorts. Arriving at a central point in the country, they unite, living so prosperously and peacefully the rest of the crumbling nation can’t help but notice. Obedient Christians making tremendous sacrifices to live according to the mandates of their faith, the way it has been throughout the history of Christendom. Call them new pilgrims, radicals, or fanatics for Christ, but as always, call them victorious!”

Published by Christian Faith Publishing, Dennis A. Beaudry’s new book provides a compelling narrative with themes that ring all too true for modern Christians.

Beaudry shares in hopes of challenging both new and established followers of Christ to look at the current state of the church and societal trends through a creative fiction.

Consumers can purchase “THE STATE OF CHRISTIANITY” at traditional brick & mortar bookstores, or online at Amazon.com, Apple iTunes store, or Barnes and Noble.

For additional information or inquiries about “THE STATE OF CHRISTIANITY,” contact the Christian Faith Publishing media department at 866-554-0919.