“The Thurdian Experiment” from Christian Faith Publishing author Dennis Barry is a page-turning narrative about an alien empire’s experiment of observing the capacity of living beings in thriving in a primeval land. 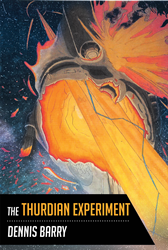 Barry shares, “If scientists from another planet abducted you to study you like we study wildlife on Earth, what would you do?

“What if while you were on board, the ship was attacked by another alien group?

“Would you trust your captors’ assessment that the other ship belonged to a hostile empire and your captors were the good guys?

“Would you fight to protect the ship? To protect your abductors?

“What would you do if, for service rendered to the empire, you are granted a title and a whole continent to rule?

“Would you accept, even though it’s a primitive planet? What if a stipulation is that you marry one of the scientists, an altered sapien—a cat woman? Or would you refuse the prince’s gifts, snubbing an empire?

“It’s easy to rule a primitive planet…or is it?

“Then the galactic war comes to you.

“WHAT WOULD YOU DO? WOULD YOU?”

Published by Christian Faith Publishing, Dennis Barry’s new book is an action-packed masterpiece that shows the vastness of space and the idea of a corrupting power at the expense of morality.

This book is a riveting depiction of what future beholds for mankind as they approach the epoch of technological revolution.

View the synopsis of “The Thurdian Experiment” on YouTube.

Consumers can purchase “The Thurdian Experiment” at traditional brick-and-mortar bookstores or online at Amazon.com, Apple iTunes store, or Barnes and Noble.

For additional information or inquiries about “The Thurdian Experiment,” contact the Christian Faith Publishing media department at 866-554-0919.