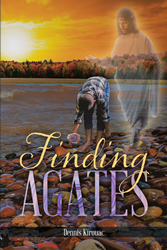 “Finding Agates”: a fascinating collection of pieces that speak about the greatest treasure, the chief cornerstone, the Savior, and all of God’s truths that are revealed after a period of explorations. “Finding Agates” is the creation of published author Dennis Kirouac, an excellent writer.

Kirouac shares, “Agate is named as the second stone in the third row of the high priest’s breastplate. Agates are a form of chalcedony (a fine-grained variety of quartz) that are banded or lined in a variety of patterns of colored layers. Colors range from white to dull yellow, red, brown, orange, blue, black, and gray. The Hebrew word for agate is shebo which literally means ‘to flame, split into tongues.’ ‘Agate’ comes from the Greek word, achates, which is the name of the river in Sicily where agate was mined (http://www.preciousstonesofthebible.com).

“The foundations of the city walls were decorated with every kind of precious stone. The first foundation was jasper, the second sapphire, the third agate, the fourth emerald, the fifth onyx, the sixth ruby, the seventh chrysolite, the eighth beryl, the ninth topaz, the tenth turquoise, the eleventh jacinth, and the twelfth amethyst. The twelve gates were twelve pearls, each gate made of a single pearl. The great street of the city was of gold, as pure as transparent glass. (Revelation 21:19–21, NIV)
“Rocks and stones are mentioned throughout the Bible, and many times they are synonymous with truth.

“‘And I tell you that you are Peter, and on this rock I will build my church, and the gates of Hades will not overcome it’ (Matthew 16:18, NIV).

“Here we see that Jesus is telling Peter that upon this truth he will build His church.

“‘So David triumphed over the Philistine with a sling and a stone; without a sword in his hand he struck down the Philistine and killed him’ (1 Samuel 17:50, NIV).
“Goliath came at David with his own armor. He had his own helmet of salvation, his own breastplate of self-righteousness, and the sword of his own spirit. David launched God rock of truth which went straight to the source of the problem, right between the eyes where man’s thoughts reside, and he used Goliath’s own sword to remove this origin of the knowledge of good and evil.

“‘When they kept on questioning him, he straightened up and said to them, “Let any one of you who is without sin be the first to throw a stone at her”’ (John 8:7, NIV).
“Here the people had the rocks of truth about this woman, and according to the Law of Moses, they were within their rights to use these truths on her, but Jesus’s answer shows us how we are to handle these truths we find out about each other. We are to lay these truths before Jesus and let Him handle it.

“This little book is about the most precious stone of all, the chief cornerstone, Jesus, and all the truths that God has let me find over the years of searching. Some are rough around the edges, some are not, but all are to the glory of God. To me, the definition of glory means the invisible made visible. The invisible nature of God made visible to you and me.”
Published by Christian Faith Publishing, Dennis Kirouac’s new book is a gripping and potent read for everyone who wishes to discover God’s glory and His wisdom across pages of inspiration.

For additional information or inquiries about “Finding Agates,” contact the Christian Faith Publishing media department at 866-554-0919.