Shively knew that he couldn't turn his back on Taylor in this moment of darkness, he decided to stick in his corner to help him heal. This being Shively's third time advocating for Taylor, he realized trauma and mental health were real and pledged AYBOS undivided attention. 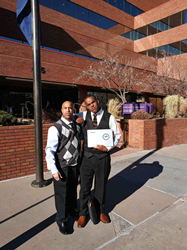 It was at this moment he decided to pledge AYBOS' undivided attention to fighting trauma with it's worse threat, social support. Out of these unfortunate circumstances the Rebuild Your Mind Challenge was born.

C. A. Shively officially formed The Association of Young Business Owners (AYBOS) in 2008 as AYBOS Marketing LLC. At the time he was still in the music business as a majority label stakeholder in Hustle N Flow (HNF) Music Group. Shively saw an opportunity for AYBOS to create marketing campaigns for HNF, and HNF to create any music compositions needed for AYBOS. No one from AYBOS would have ever thought they would be advocating for mental health through The Rebuild Your Mind Challenge (RYM) 12 years later.

Shively's business partner Marchell Taylor was still incarcerated on the now public 20 plus year sentence covered in earlier articles. Shively reflects on Taylor's passion for business and teaching. He says Taylor would routinely write him 10, 20 and even 30 plus page letters outlining the business and marketing principles he was studying. Since Taylor was incarcerated, sometimes the information would be outdated. Shively would take the information he would provide, and proof it through the internet, making for sound data. This blend of facts, theory and education became the foundation of both companies. He says without a formal education, he wore the hats of lawyer, accountant, plan writer, and yes, even artist at times.

Shively's advocacy began with writing letters to the prison, parole, halfway houses and any angle possible to free Taylor. The two will now tell you they are brothers, and this bond grew out of Taylor grooming Shively for business and Shively advocating for Taylor's release for 4 years.

Fast forward to 2012 when Taylor was finally released. After 4 years, both AYBOS and HNF had business plans, logos, email addresses and social medias as Shively saw these were now the standard in business.

In 2014 the 5 members of HNF, including Shively, decided to go separate ways due to the underhanded tactics of the music business. One member, a mental health advocate himself, Sheria Hicks aka Drettie Goines, filmed his Rebuild Your Mind Challenge in support of AYBOS, see the video here: https://youtu.be/BV-laGK1Nc0

AYBOS, still functioning, began venturing into socially responsible causes. At the time breast cancer specifically was the cause, as Shively's mother had just been diagnosed and Taylor's mother had succumbed to the disease years prior. This was actually the beginning of AYBOS venturing into advocacy. As the campaign began to gain steam and garnered collaborative support from the American Cancer Society, Colorado Breast Cancer Coalition, Elitch Gardens, Marriott Hotels and many more. Again, everything seemed to be looking up, however this would be the second time Shively would have to advocate for Taylor's release.

Taylor called Shively from the county jail telling him that he was on his way back to prison for a parole violation. He would continue to tell Shively "Something is wrong with me", to which Shively would jokingly reply, "Your good! Do some push ups!" Shively went on again writing letters and making phone calls advocating for Taylor's release. He would return to society in just 1 year, and they both thought he was all better, they got back to work immediately.

Shively would recall Taylor constantly acting and thinking like his children, Corey (8) and Christiana (5) at the time when he returned from prison. The most "common" of sense seemed to be the most trivial to Taylor. They were constantly arguing and Shively would ask, "What is wrong with you?", and Taylor would reply, "I just don't know".

Everything was looking up for AYBOS, the two were back in action. They were finalizing the details for the breast cancer campaign, finalizing their financial book and nurturing their newly formed Denver Metro Chamber of Commerce membership, then Shively got the call again. Somehow, Taylor was now facing 300 + years as the story has been told several times in the news lately. Without knowing the details of the case, Shively momentarily considered turning his back for good. This was the third time he would have to fight for Taylor's freedom, and coupled with the business disappointments, he honestly felt it was time to throw in the towel.

After Taylor finally got through on the phone, hearing him out, Shively knew that he couldn't turn his back on Taylor in this moment of darkness. He decided to put business aside and stick in his corner and help him heal. When Taylor explained to him that he was learning about his damaged prefrontal cortex, adverse childhood experiences and the effects of trauma on his brain, everything began to make sense.

With this being Shively's third time advocating for Taylor, he realized trauma and mental health were real and silently affecting many of the people around him. This was including his own family, as Shively's mother began to abuse alcohol and pain medication behind the depression of breast cancer. Rosemary Elizabeth Bob, Shively's mother, passed away of breast cancer complications on January 23, 2017, it changed him forever.

It was at this moment he decided to pledge AYBOS' undivided attention to fighting trauma with, it's worse threat, social support. Out of these unfortunate circumstances the Rebuild Your Mind Challenge was born. Since Taylor's release, he has continued in therapy and even convinced Shively to start therapy himself to deal with business stress and grief. AYBOS goal is to set off a global mental and social health movement with the RYM Challenge.

This was also the beginning of AYBOS Advocacy Services, in which AYBOS helps with reentry, legal review and business development. Shively admits that all the business disappointments AYBOS has endured have not been very healthy for the organization. This is why AYBOS built the rebuildyourmind.org website and launched AYBOS Advocacy Services. The website is an extension of the RYM challenge and AYBOS' attempt to be trauma-responsive by providing mental health alternatives to those in need. As AYBOS, Taylor and Shively continue to advocate for those who may be suffering in silence.

Shively and Taylor sat down with Deputy Mike Jackson to discuss the mission of the Rebuild Your Mind Challenge. You can see the video here:

With over 60 challenges filmed to date, the question is why haven't you gone to @rebuildyourmindchallenge on Facebook and taken the challenge yourself?