Derek E. Anderson’s newly released “Playtime Is Over” is an enticing book that will reveal to the readers the truths that lie behind the current issues of the world

“Playtime Is Over: Brace Yourself like a Woman/Man” from Christian Faith Publishing author Derek E. Anderson is an engrossing novel that challenges the readers to change for the better as they are about to see the realities of life that await them. In this book, the author invites the readers to reevaluate their lives so they may be able to live a life free from the things that hold them from growing. 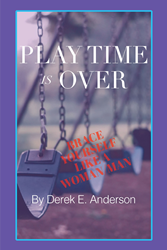 “Playtime Is Over: Brace Yourself like a Woman/Man”: an enthralling account that invites the readers to allow the Holy Spirit to navigate their lives so they may be able to see where they are going amidst these darkest days. “Playtime Is Over: Brace Yourself like a Woman/Man” is the creation of published author Derek E. Anderson, a writer whose love for writing became his way to deal with living in the projects and his family’s brief brush with homelessness. He joined the U.S. Army at the Los Angeles MEP station to escape the tragic events of his life in the inner city.

Anderson writes, “‘Playtime Is Over’: The book that is long overdue yet very much needed is finally here. Too often many people live a life that becomes one big lie after another. I have learned by living that it’s one thing to lie to other people, but it’s a terrible thing to lie to yourself. For many years some people have allowed their life to continue in this state of ‘deep sleep,’ which is destructive not only to themselves but to others as well. This book is not to a race or creed of people, but to a type of people: To people that know that there is more to life than the things that they are seeing and doing. To people who know that there are issues and topics that need to be talked about (yet), not many people seem to want to talk about them. To people that are so fed up with the sexual sins and perversions of these times that they just want for someone to address the topic from a real honest perspective.

“Well, that is what I am here to do, talk about the sexual sins and perversions that are overrunning the world we live in. Healthy sexual relationships were designed to be a good thing, performed within the union of marriage between two (consenting) married adults. What we are allowing today in a lot more ways than one is for contamination to settle in. Men and women are leaning to their own understanding and doing (by choice) whatever they are big and bad enough to do. Some people (not all) live their lives in silence about a lot of these topics, because they don’t have anyone to talk to about them. Nowhere to turn for real, honest conversations about this issue. For the most part, we spend time on the surface of these issues. Well, within the pages of this book we will go past the surface and bring some clarity in a lot more areas than not, so consider your realities and know that help is here. So, brace yourself like a woman/man because ‘playtime is over!’”

Published by Christian Faith Publishing, Derek E. Anderson’s new book is a contemporary tome that exposes the current issues of the world that need to be talked about. It aims to open the readers’ minds and encourages them to open their eyes so they can see the realities of why these issues have to be addressed from a truthful and sincere point of view.

Consumers can purchase “Playtime Is Over: Brace Yourself like a Woman/Man” at traditional brick & mortar bookstores, or online at Amazon.com, Apple iTunes store, or Barnes and Noble.

For additional information or inquiries about “Playtime Is Over: Brace Yourself like a Woman/Man,” contact the Christian Faith Publishing media department at 866-554-0919.