Richard Burson announces the publication and release of his debut book 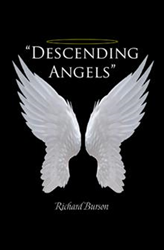 Richard Burson’s new book, “Descending Angels” (published by WestBow Press), is an account of the multiple experiences he had with hospice patients as a chaplain. Since everyone faces the inevitability of death, Burson believes his book will bring comfort and hope to people nearing life’s end and their loved ones after they are gone.

“Descending Angels” speaks of the love of God for his children and the angels from heaven to carry his children home to heaven through several encounters with people who Burson ministered to while they were dying. The book discusses the origins of angels, their makeup and their roles for humans. Burson also deals with the unknowns of death and provides some answers to the questions people might ask as they are dying or a loved one is dying.

An excerpt from “Descending Angels”:
Notice what Hebrews 1:14 says: “Are not all angels ministering spirits sent to serve those who will inherit salvation?” God’s promise here tells us that angels are with us and will carry us to paradise

About the Author
Richard Burson was born in Hayward, California, in 1947 and moved to Douglas County, Oregon in 1950 where he grew up. In 1966, Burson was married and drafted into the U.S. Army before being honorably discharged in 1968. After the Army, Burson worked in the mills of Douglas County until the age of 31, when he moved his family to Dallas to attend Criswell Bible College. After graduating, they moved back to the Northwest where he served in small churches for 37 years and attended Golden Gate Seminary Northwest. Burson retired in July of 2015 and spent time golfing, writing, and traveling before receiving and accepting a call to a church in Washington. He and his wife, Josie, have been married for 50 years and have three children: Susan, Rick and Rose.

WestBow Press is a strategic supported self-publishing alliance between HarperCollins Christian Publishing and Author Solutions, LLC — the world leader in supported self-publishing. Titles published through WestBow Press are evaluated for sales potential and considered for publication through Thomas Nelson and Zondervan. For more information, visit westbowpress.com or call (866)-928-1240. For WestBow Press news, click “Like” at facebook.com/WestBowPress and follow @westbowpress on Twitter.
###