Robinson Creative Inc. now adds two international honors to its growing list of designations for the integrated national Volaris Apartments campaign, winning one Platinum and one Gold Muse Creative Award. This brings the total to six awards for the multifamily campaign. 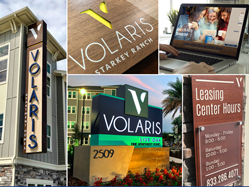 "This is an excellent campaign connecting identity, signs, print, web, and marketing seamlessly over multiple communities. We are thrilled to receive such recognition and international acclaim,” states President Ben Robinson.

Http://robinsoncreativeinc.com - Out of more than 3,180 submissions from 46 countries, Robinson Creative Inc. has won Platinum recognition for the national Volaris branding campaign and Gold for the Volaris website in the 2019 Muse Creative Awards competition. The winning work was created by Robinson Creative Inc. for Waypoint Residential and it brings the total to six awards for the campaign.

"This is an excellent campaign connecting identity, signs, print, web, and marketing seamlessly over multiple communities. We are thrilled to receive such recognition and international acclaim,” states President Ben Robinson.

The Muse Creative Awards is an international competition for creative and design professionals from all disciplines, who help push the evolution of their industry in a positive direction.

The Muse Creative Awards are administered and judged by International Awards Associates (IAA), and stellar panels of internationally-recognized professionals from both fields. IAA oversees awards and recognition programs, assembles judging panels, and sets rigorous standards for both competitions.

This year’s Grand Jury Panel includes 42 renowned, experienced, and brand-new judges from 22 countries worldwide. Judges hail from leading companies in the creative and digital industry from all corners of the globe.

Robinson Creative Inc. recently won two Gold Hermes Awards with one Gold and Silver Communicator Award for the Volaris campaign. At present, this brings the total number of designations to six. The national campaign is also nominated for the Davey Awards and winners will be announced later this year. The firm specializes in multifamily branding and the implementation of the brand with produced and managed products.

About Robinson Creative Inc.
Robinson Creative Inc. (“RC”) is an award-winning creative design firm specializing in multifamily and real estate branding with complete integration. An expanding presence throughout the United States, RC’s main office is located in the Dallas metroplex with two additional satellite offices. RC’s 20-year plus history encompasses a variety of clients and services.