An Express Employment Professionals survey, in conjunction with The Harris Poll, reveals the top reason employees leave is for better offers from other companies. 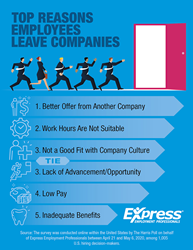 "There are a lot of variables in the current economic climate, but the one thing that will always propel businesses to success is a healthy company culture." - Express CEO Bill Stoller

In a time of record unemployment due to the COVID-19 pandemic, 81% of hiring decision-makers say their company has had extended job vacancies resulting in less motivated employees, loss in revenue and lower employee morale.

This is according to a newly released survey conducted by The Harris Poll and commissioned by Express Employment Professionals.

Hiring decision-makers say employees cite better offerings at other companies as the top reason for quitting, such as pay/benefits (35%), perks (35%) or advancement opportunities (34%).

John Dickey, Express franchise owner of two offices in Massachusetts, believes employees move on from jobs when the company culture is poor.

“If workers are happy with the culture and they like working with their boss and coworkers, they will overlook the other reasons for leaving their job,” he said. “I’m a believer that workers don’t quit their jobs, they quit their boss.”

Of the 81% of hiring decision-makers who say their company has had extended job vacancies, the vast majority (82%) say the extended vacancies have taken a toll. This includes less motivated employees (25%), loss in revenue (24%), work not getting done (23%), lower employee morale due to employees being overworked (23%) and delays in delivery times (22%).

The extent to which these negative impacts are felt vary by company size, with the largest companies about twice as likely or higher than the smallest companies to say they experience these frustrations.

“Show appreciation and pay people fairly,” Lori Gajdzik, branch manager for the Crystal Lake, Illinois, Express office, said of how to retain and hire employees. “Allow for growth and development, and give flexibility if necessary for child care, as well. This is especially true as employees struggle with their school system and the uncertainty of the traditional classroom setting this upcoming fall.”

“Treat them like people,” she said. “And communicate, especially during this time of the COVID-19 pandemic. Let people know what is happening and don’t keep them in the dark.”

Hiring is ramping up across the country as Express offices help companies fill those extended job vacancies with more than 23,000 open positions available—a return to pre-pandemic levels. And Wenninger, Dickey and Gajdzik agree more workers will return to the workforce with the end of the $600 weekly federal unemployment supplement.

“Companies need people to show up for work to get their product out the door,” Gajdzik said. “A robust economy is critical to the health and wellbeing of a productive society.”

Employees are a company’s most valuable asset, and no matter market conditions, it’s important to take care of them, says Express CEO Bill Stoller.

“There are a lot of variables in the current economic climate, but the one thing that will always propel businesses to success is a healthy company culture,” he said. “Good employees are worth the investment.”

About Bill Stoller
William H. "Bill" Stoller is chairman and chief executive officer of Express Employment Professionals. Headquartered in Oklahoma City, the international staffing company has more
than 825 franchises in the U.S., Canada and South Africa, and beginning in 2020 will expand to Australia and New Zealand. Since its inception, Express has put more than 8 million people to work worldwide.