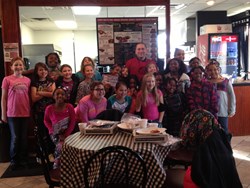 Watching the kids' faces light up when they get to eat the pizzas they made themselves is an incredibly rewarding experience.

Detroit Style Pizza Co. today announced its popular pizza tours for kids will now be held at its new Roseville location. Developed by World Champion Pizza Maker Shawn Randazzo, the tours serve as group outing activities for schools, churches and scouting troops because they are designed to fuse fun, education and lasting memories into a single 90-minute experience.

“We're thrilled to bring our Detroit Style Pizza Co. tour to our new Roseville location, which was designed to immerse families in the entire Detroit experience complete with Detroit-themed wall art, a large dining area and of course Authentic Detroit Style Pizza,” said Randazzo. “A lot of people don't know how much history is behind Detroit Style Pizza, so our goal is to make sure everyone has a blast learning about Detroit history and our pizza style. For my part, watching the kids' faces light up when they get to eat the pizzas they made themselves is an incredibly rewarding experience.”

The Detroit Style Pizza Co. Tour was designed to be fun and educational for both children and adults. In the past, the tour has been a popular feature at the company's St. Clair Shores and Clinton Township locations; from now on, the tours will be held at the Roseville pizzeria due to its larger seating area. The tour will also be available in St. Clair Shores upon request.

The ideal group size for the tour is 5 to 30 people, including adults. Tours must be scheduled at least a week in advance and are held between 9 a.m. and noon Saturdays and Sundays as well as from 9 a.m. to 2 p.m. on non-school weekdays, subject to availability. The fee for the tour is $10 per person.

Authentic Detroit Style Pizza is still baked in seasoned square steel pans and features a thick, light and airy on the inside, crispy on the outside crust. The dough is lined with pepperoni then topped with brick and mozzarella cheeses and then other toppings before being baked in a deck oven. After baking, red sauce is ladled on top, lending Authentic Detroit Style Pizza the nicknames “red top pizza” and “upside down pizza.”

In 2012, Shawn Randazzo's Authentic Detroit Style Pizza was named “World's Best Pizza” at the International Pizza Expo, where he was also crowned World Champion Pizza Maker. Randazzo's three Metro Detroit locations serve his World Champion recipe, and he has made it his mission to ensure everyone gets a taste of the “Motor City Secret.”