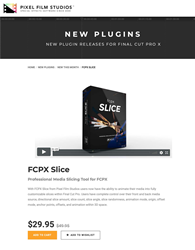 With FCPX Slice users can flip, rotation, position, and distort media into an arrangement of panels. With easy to use controls each user has the ability to generate a custom slice animation.

FCPX Slice was professionally designed to work seamlessly inside of Final Cut Pro X. As an effect, FCPX Slice can be dragged and dropped and previewed in real time. With the published parameters found in the FCPX inspector, users have the ability to make further adjustments with just a few clicks of a mouse.