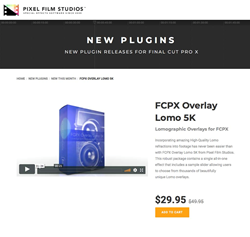 FCPX Overlay Lomo 5K contains a massive amount of content. Simply use the sample slider to select from thousands of lomo overlays. Simple adjust the style controls for endless possibilities. Users can also change the horizontal and vertical orientation of overlay samples as well as the scaling to achieve all-new looks.

FCPX Overlay Lomo 5K’s overlay footage is shot in 5K resolution using the industry professional RED Dragon camera. This all-in-one tool can be utilized for HD to 5k films without any loss in quality. These outstanding 5k lomo overlays help the user create realistic and beautiful looking refractions within seconds.

FCPX Overlay Lomo 5K has an advanced lighting control system that allows the user to adjust the contrast, exposure, and saturation of refractions. Users are also given control of the flicker of any prism using speed, intensity and noise controls.

To apply FCPX Overlay Lomo 5K to any scene, drag and drop the included title layer on top of footage in the FCPX timeline. Afterwards, select the title effect and maneuver to the Inspector window in the top right side of Final Cut Pro X where users can find all the controls necessary to manipulate prismatic refractions.