Diakont was presented with the Emerging Technology Award for their online robotic tank floor inspection technology during this year’s Global Tank Storage Awards, hosted by Tank Storage Magazine at the StocExpo Conference in Rotterdam, Netherlands. 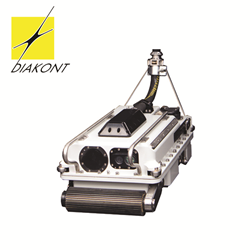 This technology is a game-changer for petroleum facility operators; allowing for more frequent inspections of these critical assets, at lower cost, while reducing environmental impact and increasing personnel and public safety.

Diakont uses its fleet of certified explosion-proof robotic tank inspection crawlers to perform comprehensive inspections of the critical steel floor plates of large aboveground petroleum storage tanks, while the tanks remain filled and in operation. Regulations mandate that all these tanks be inspected on a periodic basis to ensure that corrosion or other degradation of the tank structures do not cause the contents to be released. Before this technology was developed by Diakont, refinery and other petroleum facility operators were forced to take these infrastructure assets out of service, incurring substantial cost, releasing extensive greenhouse gases, putting personnel in confined spaces, and also incurring several weeks of downtime, with associated loss of productivity.

Legacy methods of petroleum tank floor inspections conducted via human entry expose personnel to toxic substance and confined space hazards. The US Bureau of Labor Statistics reported 166 confined space fatalities in 2017, as well as 531 fatalities due to harmful substance or environmental exposure. Diakont’s robotic inspection services eliminate this risk, since the robots enter the tank instead of the personnel. The Diakont inspection robots incorporate multiple sensor arrays, including high-resolution ultrasonic, for conducting the structural examination as well as navigating and mapping the tank space.

Edward Petit de Mange, Managing Director for Diakont, was excited to accept this award on Diakont’s behalf. “We are humbled by this honor because it affirms industry trust in this paradigm shift in inspection methodology. This technology is a game-changer for petroleum facility operators; allowing for more frequent inspections of these critical assets, at lower cost, while reducing environmental impact and increasing personnel and public safety.”

The Emerging Technology Award is presented to a cutting-edge technology that allows forward-thinking storage terminals to keep pace with a rapidly changing working environment. Winners of this year’s Global Tank Storage Awards were selected by a panel of executives and professionals from the global tank storage industry. Diakont was one of 11 awardees recognized at the ceremony in Rotterdam. The award-winning teams include CLH, Sprague Operating Resources, Toptech Systems, and more.

Diakont is a global technology company with a technical center based in Carlsbad, California, USA. The company’s mission is to provide high-tech solutions that enhance the safety and economy of the most demanding applications. Diakont currently has a global workforce of over 1,300 highly-skilled professionals whose work supports the pipeline, energy generation, and manufacturing industries.