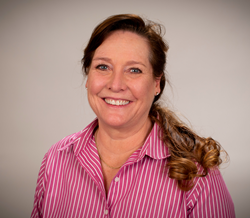 Diana not only nurtured innovations, but she also enabled those around her to innovate.

The Additive Manufacturing Users Group (AMUG) today announced Diana Kalisz, Vice President, Materials for 3D Systems, as the recipient of its esteemed Innovators Award. AMUG bestows this award on those who have cultivated innovative ideas that have advanced the additive manufacturing industry.

Mark Abshire, AMUG president, said, “Diana’s contributions to innovation in additive manufacturing center around bringing innovative ideas to life. In that vein, she has played a pivotal role in delivering new machines, materials, and software. And she not only nurtured innovations, but she also enabled those around her to innovate.” He continued, “Diana is the kind of person AMUG seeks to celebrate. She is someone that is often overlooked because she does her job so well and doesn’t seek out recognition.”

Abshire added, “Diana is the reason why I joined the additive manufacturing industry. Nearly 30 years ago, I worked with Diana as a customer of 3D Systems. Her passion for and dedication to the technology was infectious.” He also noted that Diana was instrumental in the foundational days of the user group as the liaison between the users and 3D Systems. In that role, she listened to user wishes and turned them into R&D projects.

Diana has managed, in various capacities, the engineering and development programs for the company’s hardware, software, and materials solutions. Before her current position, she served as Vice President, Engineering. Under her leadership, 3D Systems has commercialized dozens of products with the intent to facilitate maturation within the industry and to address the needs for production applications.

Presently, Diana is 3D Systems’ Vice President, Materials, focusing on developing production applications for the company’s Figure 4 platform. She works with customers and her 3D Systems colleagues to enable the use of Figure 4 solutions from selection (printer, materials, and software) through development to meet the needs of those deploying additive manufacturing as part of their production workflow.

Diana is a member of P.E.O., a women’s philanthropic educational organization that supports higher education for women through scholarships, grants, awards, loans, and stewardship. This small organization has raised and given hundreds of millions of dollars to support women’s education over its 153-year history.

On Wednesday, March 22, 2023, Diana will take the stage for a casual, conversational interview during the AMUG Conference. In this Innovators Showcase, she will respond to questions asked by the host and conference attendees with the intent of getting to know the person behind the innovations and gaining guidance from her experiences. The Innovators Showcase is unique because it is structured to be an intimate conversation between two acquaintances witnessed by AMUG Conference attendees.

Designed for both novice and experienced additive manufacturing users, the AMUG Conference agenda topics range from technology basics to advanced applications to business considerations. The conference will have nearly 150 presentations, workshops, and hands-on training sessions. A preliminary agenda will be available mid-December at http://www.amug.com/conference-agenda-planner/. The AMUG Conference will be held March 19 – 23, 2023, at the Hilton Chicago in Chicago, Illinois. Conference details and registration are available at http://www.amug.com.

ABOUT ADDITIVE MANUFACTURING USERS GROUP (AMUG)
AMUG is an organization that educates and advances the uses and applications of additive manufacturing technologies. AMUG members include those with industrial additive manufacturing/3D printing technologies used for professional purposes from companies such as Covestro Additive Manufacturing, Desktop Metal, DMG MORI, Dyndrite, EOS, Essentium, ExOne, fabWeaver, Formlabs, GE Additive, Hexagon, HP 3D Printing, LuxCreo, Meltio, Nexa3D, Stratasys, and Tekna. AMUG meets annually to provide education and training through technical presentations on processes and new technologies. This information addresses the operation of additive manufacturing equipment and the applications that use the parts that are manufactured. Online at http://www.amug.com.