Specializing in hospitality management and recently elected second in the world by employers , the prestigious Glion Institute of Higher Education has appointed Didier Aniès as Executive Chef. With extensive expertise in both cooking and training, this renowned expert and "Meilleur Ouvrier de France in 2000" (World’s best craftsman) will be a considerable asset for Glion. In his role as Executive Chef, he will instil his culinary vision as well as providing inspiration for the menus of the institution's multiple restaurants. 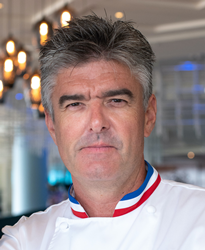 Didier Aniès began his career in international cuisine in Germany and Austria before swiftly joining the prestigious star-rated restaurants of the high-end hotels in the south of France. He started at the Royal Casino Hotel in Mandelieu-la-Napoule near Cannes as sous-chef alongside Michel Joffre.

His expertise and creativity enabled him to quickly conquer the Executive Management of various kitchens, firstly at the restaurant of the Relais et Châteaux "Le Cagnard" in Cagnes sur Mer. He then joined La Coupole restaurant in the Mirabeau Hotel in Monte Carlo where he obtained his first Michelin star in 2006. In 2007, he became Executive Chef of the famous Grand Hotel du Cap Ferrat, where he remained for ten years and where he also obtained the prestigious guide’s seal of approval in 2008.
Prior to joining Glion Institute of Higher Education, he held the position of Executive Chef at the Fairmont hotel in Monaco, which he joined in February 2018. There he managed a Brigade de Cuisine of 110 people and supervised all the catering outlets.

In parallel to his operational functions within this prestigious establishments, Mr. Aniès has always had a taste for transmission, which is at the heart of the values of the Meilleurs Ouvriers de France. He has worked as a trainer in many institutions including the Lycée Régional d'Hôtellerie et de Tourisme Paul AUGIER in Nice, the Ecole Supérieure de Cuisine Grégoire Ferrandi, the École des Chefs and the Fondation Auguste Escoffier.
He will join Glion on March 29th, replacing Benoît Carcénat who, during his four-year mandate, created the two beautiful restaurants, "Le Fresh" and "Le Bellevue", which are highly appreciated by both students and external clients. In particular, he made a major contribution to the gastronomic restaurant "Le Bellevue" by obtaining a 15 out of 20 Gault & Millau score in 2018 only a few months after its opening. The student-run establishment is now rated 16 out of 20 by the gastronomic guide, which classifies it as "unquestionably one of the most beautiful restaurants in the country", underlining the "wildly elegant modern" décor.

Didier Aniès will be in charge of these two restaurants while overseeing production for the various two Swiss campus facilities: cafeterias, food courts and boutique. Mr Aniès will also be involved in the Bachelor in International Hospitality Business program and in themed Masterclasses which will allow this expert emeritus to share his knowledge and experience with students on a daily basis.

"We are very pleased to welcome Mr. Aniès, whose unique dual background in both cooking and training will be invaluable and inspiring for our students," said Fabien Fresnel, Chief Operating Officer of Sommet Education.