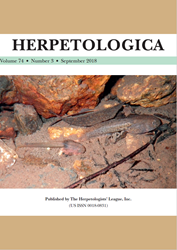 Further research is necessary to fully understand the isotopic variation that occurs between the frog species, as the researchers hypothesize this might be attributable to the increased availability of herbivorous insects during the dry season having warmer temperatures.

Herpetologica – Frogs are appropriate model organisms for studying trophic ecology or the feeding relationships within an ecosystem. Because of their indirect life-history and ability to inhabit both aquatic and terrestrial habits, frogs play multiple roles within a given habitat area, especially in terms of their diet.

In an article published in the journal Herpetologica, researchers from the Universidade Federal do Rio Grande and Texas A&M University examined two species of treefrogs, Pseudis minuta and Scinax squalirostris, found in the Logoa do Peixe National Park in Brazil. These frogs coexist in the same geographic region, with access to the same resources, giving researchers a solid basis for comparison. Because P. minuta has a larger body size and mouth width, as well as a different anatomical structure that allows for deeper water movement, the researchers hypothesized that the species would have a more diverse diet than S. squalirostris. The researchers also hypothesized that no matter the size of the frog, both would exhibit a larger diet diversity during the warmer, drier period (October to March) of the year.

From April 2008 to May 2009, adult specimens of both P. minuta specimens and S. squalirostris were collected for examination. In addition to the frogs, the researchers collected samples of plants, small invertebrate animals and insects that could constitute the diets of both frog species. In the laboratory, the frogs were measured, their stomach contents were examined and the isotopic composition of carbon and nitrogen in their muscle tissue was analyzed.

The researchers determined that P. minuta had a more diverse diet, and that both species maintained relatively consistent diets throughout the year. However, they found no correlation between the diversity of prey items in the diet and warmer, drier weather. The isotope analyses indicated that, contrary to the initial hypothesis, S. squalirostris experienced a seasonal shift in the type of food it ingested. Further research is necessary to fully understand the isotopic variation that occurs between the frog species, as the researchers hypothesize this might be attributable to the increased availability of herbivorous insects during the dry season having warmer temperatures.

Full text of the article, “Trophic Ecology of Two Sympatric Frogs with Contrasting Morphology and Habitat Use in a Subtropical Wetland,” Herpetologica, Vol. 74, No. 3, 2018, is now available at http://www.hljournals.org/doi/full/10.1655/Herpetologica-D-17-00069.1