A downtown restaurant offers food paired with a fun, family-friendly movie in this monthly movie series held in Round Rock's award-winning downtown plazas 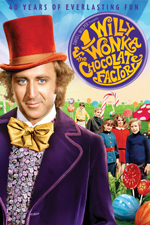 Willy Wonka and the Chocolate Factory

Movies in the Park is returning this summer -- with a twist. We've added food!

Now in its fourth year, Movies in the Park gives families the chance to catch some classic favorites in award-winning plazas downtown. The 2014 lineup, now known as Dinner and a Movie, pairs a Downtown Round Rock restaurant with each film.

The curated list of foodie films for summer 2014 includes:

The all-ages screenings begin at sundown, with guests invited to BYOB (no glass), blankets/lawn chairs. The restaurants will prepare an abbreviated menu to accompany each film; all restaurants accept cash or card.

Before each film a band will be featured, so we encourage folks to come early and stay a while.