Discovering Destiny and the Uncommon Way of Living: Choosing Truth

Xulon Press author’s island trilogy reveals how once we embrace who we are in Christ, we have new authority. 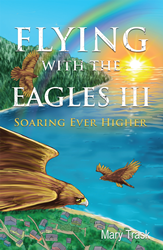 Flying with the Eagles trilogy details the growth and transformation of those residents choosing to fully abandon themselves to the ‘way of the eagle.’

Flying with the Eagles III: Soaring Ever Higher draws readers into an environment where its residents have been dominated and controlled by fear. Within this installment in the trilogy, a dark and devious plan is revealed to the village elders of Kumani as a new figure steps up to take control of the island. Elders scramble to maintain their fragile hold of power over the lowlanders while the residents of the Eagles’ Nest formulate their own plans. As Ms. Bina’s informational “tea parties” spread throughout the villages, Galen, Shoshanna, Roany, and Uri begin their training at the Eagles’ Nest. Together with the others there they must step up to face their own fears. Lives are at risk and the hope of freedom is dependent upon their success. As families flee their villages in search of an escape, rescuers from both the Eagles’ Nest and some residents of the lowlands are called upon for assistance. The dangerous plans of this new leader must be stopped and the victims of this conspiracy rescued. Will their efforts be enough to halt the planned annihilation of villages and any “unnecessary” residents of Kumani?

“Flying with the Eagles trilogy details the growth and transformation of those residents choosing to fully abandon themselves to the ‘way of the eagle.’ The eagle represents courage and tenacity but also demonstrates boldness by facing storms directly and using the winds to soar even higher than before. Fear, anxiety, and stress are underlying factors robbing many people from the truth and real confidence in the One who can set them free to soar in freedom like the eagle” said Trask.

With a background in journalism, Mary Trask has now published five books. After releasing her two non-fiction books, Mary moved into fiction writing by introducing her Flying with the Eagles trilogy. She has been married to her husband, John, for 39 years. They have four wonderful grown children, their spouses, and six amazing grandchildren.

Xulon Press, a division of Salem Media Group, is the world’s largest Christian self-publisher, with more than 12,000 titles published to date Flying with the Eagles III: Soaring Ever Higher is available online through xulonpress.com/bookstore, amazon.com, and barnesandnoble.com.