Eighty-five years after their debut, Walt Disney’s original Silly Symphony cartoons return to the big screen to delight audiences of all ages, accompanied by a live orchestra performing their original symphonic scores. 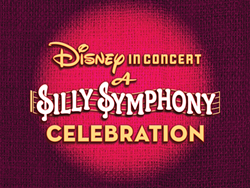 Disney in Concert A Silly Symphony Celebration is made under license from Buena Vista Concerts, a division of ABC Inc. © All rights reserved

The Kentucky Symphony Orchestra opens its 24th season October 3, 2015 with Disney in Concert: A Silly Symphony Celebration. The program is a tuneful and colorful celebration of 75 groundbreaking cartoons produced at the Walt Disney Studios between 1929 and 1939. During the production of these Academy Award-winning shorts Walt Disney perfected the skills essential to the creation of his first feature film, Snow White and the Seven Dwarfs (1937). These advances and new developments in the use of color, special effects, character animation, music and storytelling continue to influence the art of animation today.

Mr. Disney will actually appear (via video) to explain the various techniques he and his animation team employed for each of these ground breaking animated shorts including The Ugly Duckling, The Skeleton Dance, The Three Little Pigs, Flowers and Trees, The Old Mill and Music Land. Composers Leigh Harline, Frank Churchill and Carl Stalling (who went on to Looney Toons fame) and others penned the scores to these classic cartoons, which the KSO will perform in sync with the newly restored digital film masters.

This performance will mark the first time A Silly Symphony Celebration has been performed in public (outside of last month’s 23rd annual Disney Expo held in Anaheim, CA). WKRC’s morning anchor Bob Herzog will share the stage with Mr. Disney and the KSO, acting as host for the premiere presentation.

The KSO presented the regional orchestral premiere of Disney’s Pirates of the Carribbean: The Curse of the Black Pearl in 2012. In 2010 the KSO teamed up with members of the Warner animation team to create a cartoon concert that featured The Animaniacs as well as classic Bugs Bunny, Tom and Jerry and Pink Panther capers.

"Live musical accompaniment to cartoons creates a unique audio/visual genre, allowing both musicians and audience to experience and appreciate the indelible impact and role music plays in our cinematic viewing" stated KSO Music Director James Cassidy. “Besides, cartoons are where most of us were first exposed to classical music and the sound of the orchestra.”

In the studio the orchestra provides the accompaniment, mood, action and many of the sound effects in support of the characters voices and antics. The KSO’s percussionists and musicians will be quite busy covering all of the various instruments that are called for in these scores.

Step back to 1929-39 and join Walt Disney, Bob Herzog and members of the Kentucky Symphony Orchestra under the direction of James Cassidy, for its season opener and a rare chance to see these classic cartoons accompanied live by orchestra — 7:30 p.m., Saturday, October 3 at Florence Baptist Church at Mt. Zion. Reserved seating tickets are $24, $32, $40 (children ages 6-18 are 50% off). TIckets are available online at http://www.kyso.org, by phone (859) 431-6216 or at the door.

Disney in Concert A Silly Symphony Celebration is made under license from Buena Vista Concerts, a division of ABC Inc. © All rights reserved

The KSO’s 2015-16 Subscription Series continues on November 21 with “Stairway to Heaven” featuring epic works of Wagner and Bruckner. A Carnegie / KSO co-production and ten performance run of The Wizard of Oz follows January 21-31, 2016. "Heads Will Roll" celebrates artistic freedom and the raucous music of Shostakovich with three local choirs on April 9, 2016. The season wraps up May 14, 2016 with the amazing vocal versatility of Morgan James, who sings everything from Puccini to Prince as if it were written for her in a show dubbed "Soulbrette." Subscription Series packages offer up to 30% off regular ticket prices are on sale now. The Subscription Series is sponsored in part by PNC Bank.

About the KSO:
The Kentucky Symphony Orchestra takes the “phony” out of symphony through live thematic concerts that culturally enrich, educate and entertain the residents of Northern Kentucky and Greater Cincinnati. The KSO performs throughout Northern Kentucky performing three series of concerts.