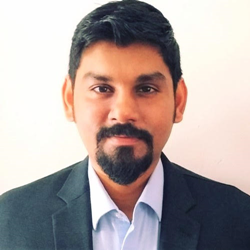 Display Supply Chain Consultants (DSCC) is pleased to announce that Siddharth (Sid) Harikrishna-Mohan has joined the firm as Director of Display Research.

Before joining DSCC, Sid was Senior Manager at Kateeva where he led the R&D work on ink jet printing (IJP) of quantum dots (QD) for color conversion applications. In this role, he worked closely with Chemistry, Engineering, Sales, Marketing, Customer Support and built key relationships with panel makers and was regarded highly as the internal subject matter expert for QD processes. Prior to Kateeva, Sid worked at Universal Display Corporation (UDC) from 2008 to 2017 where he progressed to the ranks of an R&D Team Leader. During his 9-years at UDC, he worked on conducting research and development activities relating to next-generation OLED technologies for both displays and lighting products. As a technologist, he played a crucial role in advancing numerous OLED R&D projects including UDC’s organic vapor jet printing (OVJP) process, single layer thin film encapsulation barrier film process, ink jet printing (IJP) process, flexible OLED fabrication and contributed to UDC’s vast intellectual property portfolio. As a team leader, Sid also led the team that managed the operations of UDC’s front plane fab used for OLED device fabrication for PHOLED material qualifications and quality compliance. Sid was instrumental in maintaining partnerships with several customer, academic collaborators and held a formal Visiting Research Scholar position with University of Michigan, Ann Arbor in 2010. Before UDC, Sid’s career in display started in 2008 at Eastman Kodak where he was hired as a Research Intern. At Kodak, he designed novel thin film coatings to improve the yield of AMOLED display and PMOLED lighting panels and concurrently completed his thesis on OLED device fundamentals.

According to DSCC CEO Ross Young, “We are extremely pleased to bring Sid on board. His expertise in OLED materials, QD materials and IJP equipment is extremely timely for our customers. He will lead the development of a number of related reports which we are confident will be well received. He is also immediately available for consulting.”

Sid can be reached at sid@displaysupplychain.com.