The Young Marines, a national youth program, has named SgtMaj Michael Borka the Division 5 'Young Marine of the Year.' He has been invited to travel to Guam and Iwo Jima for the annual Reunion of Honor trip. 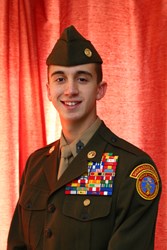 The Young Marines youth organization has named its Division 5 “Young Marine of the Year” – YM SgtMaj Michael Borka, 15, of Swartz Creek, MI. Borka is a member of the Shiawassee County Young Marines of Durand, MI. He is a sophomore at Swartz Creek High School.

“I feel very honored that I can represent the Young Marines in my division,” Borka said. “This award is really incredible for me, because it has been my goal from the beginning. I have been lucky enough to meet other National and Division Young Marines of the Year, and they certainly inspired me to be the best Young Marine I can be and to set the example for all other Young Marines to follow.”

Borka joined the Young Marines at age eight and currently, he is in his seventh year in the program. He credits the Young Marines for encouraging him to be more outgoing and willing to help others, particularly at school. Two years ago, he received the Meritorious Service Ribbon for organizing and leading his unit, with 100 percent participation, to earn the Drug Enforcement Agency (DEA) Device at the same time. It was the first time an entire unit did so.

At the Advanced Leadership School (ALS), Borka graduated in the top three which allowed him to attend the Young Marines National Symposium. Last summer he attended SCUBA school and was awarded the Rescue Diver Proficiency Award and he was certified as a Rescue SCUBA Diver which allows him to be billeted as a Dive Master on SCUBA dives. In 2010, he led his unit in a regimental drill competition in which it took first place.

“Last year, I was billeted as the Sergeant Major for the Junior Leadership School,” he said. “It was a new and awesome experience. The Young Marines’ staff was very supportive, and I really learned a lot.”

“I am more excited about the trip than I can ever describe,” Borka said. “I have heard many things about it from my father who went last year and from the Division Young Marines of the Year. I’m very excited to meet veterans of the battle on Iwo Jima and to hear their stories. It is something that not very many people have the chance to do, and I feel blessed to have been selected to go.”

After he completes high school, Borka’s goal is to attend Navy recruit training. He plans to attend college and eventually procure a master’s degree. After the Navy, he would like to teach world history at Swartz Creek High School.

“My experience with the Young Marines will help me with all my goals,” Borka said. “I have learned leadership, discipline and the value of teamwork, all of which will help me in the Navy and as a teacher.”

He is the son of Robert and Patricia Borka, who are both volunteers with the Young Marines, Robert serving as unit commander of the Shiawassee County Young Marines. Both Michael’s brother and sister are Young Marines as well.

“As you can see,” Michael Borka said, “we are a Young Marines family.”

The Young Marines organization is divided into six divisions across the United States. Each Young Marine goes through a series of selection processes starting at the unit level, going through battalion, regiment and on to the division. At the division level, the packages (portfolios) of the final candidates are reviewed for consideration.

Mike Kessler, national executive director and CEO of the Young Marines, calls each division winner to congratulate her or him. Then he invites each to travel to Guam and Iwo Jima for the annual Reunion of Honor trip.

“The trip gives each division winner a chance to showcase the program and the good work done by the Young Marines with veterans,” Kessler said. “The trip serves as an invaluable history lesson unable to be found in any book. Also, I get to know them and see how each interacts with others. If selected as the National YMOY, he or she will work for me, so this piece is important.”

The Young Marines is a national non-profit 501c(3) youth education and service program for boys and girls, age eight through the completion of high school. The Young Marines promotes the mental, moral and physical development of its members. The program focuses on teaching the values of leadership, teamwork and self-discipline, so its members can live and promote a healthy, drug-free lifestyle.

Since the Young Marines' humble beginnings in 1959 with one unit and a handful of boys, the organization has grown to over 300 units with 10,000 youth and 3,000 adult volunteers in 46 states, the District of Columbia, Germany, Japan and affiliates in a host of other countries.

For more information, visit the official website at: http://www.YoungMarines.com.