Electronic dance music fans of all varieties have a very good reason to be happy – DJ Danu5ik has returned from the studio to announce the global release of “Day Light/ Dark Night”, a full album of original work. His fans are calling it his most compelling release yet. 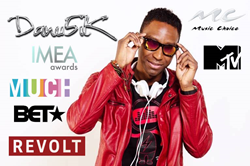 Canada's Danu5ik is quickly becoming a powerful force in the international music scene with his mix of EDM and European House that sets dance floors, studios and festivals on fire. The latest, good news, for fans is that Danu5ik recently announced the global release of the much anticipated new album “Day Light/Dark Night” just in time for the holidays to rave reviews.

“Music is life” commented Danu5ik about the new release. "Day Light/Dark Night" does a great job of capturing a very important part of my life and I am happy to share this with the world.”

Danu5ik's signature style is all over "Day Light/Dark Night”, from hard hitting beats, to inspirational lyrics and hypnotic vocals. It would hardly be a surprise to see other artists taking a shot at re-mixing some of these pieces as the word about “Day Light/Dark Night” spreads and the demand to hear more Danu5ik undoubtedly rises.

“Day Light/Dark Night” is a follow up to Danu5ik's previous very successful releases “From Sea to Kanata" and “Elysian”, and shows a stready progression of the artist's skills on all levels – as a songwriter, producer and a performer, of both his own music and his much in-demand DJ sets.

The new album is available on all the major music platforms, including iTunes, Amazon and Google Play.

Early feedback from listeners has been passionate across the board.

Michelle E., from New York, recently said in a five star review, “I've seen DJ Danu5ik a number of times and always loved his set. My boyfriend bought me 'Day Light/ Dark Night', which is absolutely breathtaking. I had high expectations and he really surpassed them. It's rare someone can be so amazing live and carry that energy into the studio. He's going to become one of the biggest names in EDM, I know it.”

For more information be sure to check out Danu5ik and grab a copy of the new album.