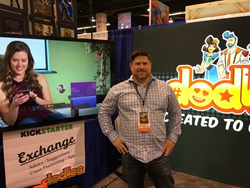 Social platforms tend to establish themselves with better forms of interaction and collaboration for their users, and I love the potential for dodl.es to be the next step in creative communication.

dodl.es, a new social animation app, has completed its maximum offering of $300,000 from 10 independent angel investors in the first 16 days of funding set to officially close on August 31. The round of investors includes a bank president, financial adviser, software developer and several small business owners.

dodl.es brings creative ideas to life quickly by simplifying digital animation and drawing and allows users to license and sell their creative assets to other users within the app. Dodl.es has begun generating widespread interest, especially within the comic-con, anime-con, and autism communities. More than 250 professional artists have signed up to contribute assets in its open marketplace, and the company recently held a successful Kickstarter campaign that attracted more than 140 backers who also will receive beta access to the app.

The financing will be used to accelerate development of the app and increase awareness amongst potential users in anticipation of a beta launch set for October 2, 2017.

“Over the past year, along with perfecting the app, we’ve been personally connecting with thousands of artists at comic-cons across the country and have been successful drawing large crowds since beginning to exhibit a few months ago,” said Craig Doriot, dodl.es president. “The speed at which we were able to attract these initial investors further reinforces the strong demand we see for this innovative approach to creative expression.”

Lead investor Luyu Yang, who discovered dodl.es through the Wisconsin Angel Network, said: “Social platforms tend to establish themselves with better forms of interaction and collaboration for their users, and I love the potential for dodl.es to be the next step in creative communication.”

The app will be free to download and generates revenue by taking a percentage of the sale of assets between creators.

About dodl.es
dodl.es is a social animation app that brings a simple yet powerful approach to illustration, animation and licensing. Founded in 2014, the mission of dodl.es is to help people tap into their individual and collaborative creativity. dodl.es is a welcoming social space with easy-to-use digital art and animation tools, and an open marketplace where users can sell and purchase creative content. Visit dodl.es for more information.