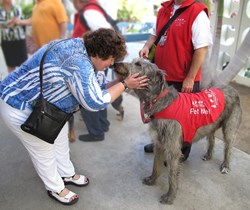 The dogs really light up the entire terminal, and make everyone smile.

Dog Tag Art is a small company with a lot of heart. The company —six team members in all— makes custom pet ID tags with a mission to “keep best friends together.” Their office is nestled in a quiet neighborhood in Asheville, North Carolina, with chickens roaming happily in the backyard—a far cry from the hustle and bustle of the Los Angeles International Airport (LAX), but that’s exactly where you’ll find Dog Tag Art custom dog tags.

You won’t find the pet ID tags in an airport kiosk or travel supply store, however. They’re only available on the company’s website, dogtagart.com, but, at LAX, you can see the custom dog tags sported by 30 therapy dogs that are part of a new volunteer program aimed at de-stressing passengers.

The program is called PUP: Pets Unstressing Passengers, and Dog Tag Art recently donated over 30 custom pet ID tags to the canines in the program. To participate, the dogs must be certified therapy dogs, and they work in short shifts, in teams.

“The dogs really light up the entire terminal, and make everyone smile,” said Heidi Huebner, Director of Volunteers for the LAX PUP program. “The response has been incredible, and they look so cute in their new tags.”

So far, LAX is the third airport to offer a pet therapy program, although it’s the largest of its kind. Huebner says they have 30 dogs now and are looking to expand the program to 50 dogs in the next two years. San Jose was the first airport to have a pet therapy program for passengers after 9-11 and has 12 dogs; Miami has one dog.

“I’d love to see more programs like PUP at major airports across the country,” said Jack Carrier, Dog Tag Art owner and founder. “We travel a lot for work—we were just in Canada for Woofstock, and next we’re headed to Los Vegas for SuperZoo. It would be great to see some therapy dogs in our travels. Dogs have such a sweet, calming energy.”

Finn, a four-year-old Irish Wolfhound rescue has been making the rounds at LAX with his owner, Brian Valente, since the PUP program first launched in April. Finn stands an impressive thirty-four inches tall at the shoulder, and is, as Brian puts it, a “Hollywood dog.” Not only has he been on several movie sets and met actors including Paul Rudd, Judd Apatow, and Albert Brooks, but he’s got major star power all his own.

At LAX, It’s not unusual for Finn to be surrounded by as many as 30 people at a time; 5-10 petting him, and the rest waiting their turn. He also has an active Facebook page, FinnTheWolfhound, with over 2,000 friends.

“We get a LOT of requests for photos,” said Valente.

Not that it goes to Finn’s head. As a model therapy dog, he stays cool and calm under pressure. Valente says Finn has always been sweet and gentle. “Part of that is Irish Wolfhound, and part of that is that rescue dogs “know” they are rescued,” he said.

Several of the therapy dogs in the PUP program are rescues like Finn.

In addition to the custom dog tag donations for therapy dogs in programs like PUP, Dog Tag Art recently launched a special Rescue and Shelter Tag Donation program for dogs in need of adoption.

“We love our dogs,” said Carrier. “And we do what we can to protect and serve them well.”

Dog Tag Art makes high-quality personalized pet ID tags featuring a sturdy recycled steel core and permanent graphics. The company was founded by owner Jack Carrier, to ensure the safe return of his beloved wandering Chocolate Lab, Maggie. Dog Tag Art has been featured on Regis and Kelly, as well as in The New York Post, Dog Fancy, and in several other publications. To request custom dog tags for therapy dogs and rescue animals, visit http://www.dogtagart.com/contact.