Since its opening in 2011, Dolphin Discovery Los Cabos has received more than 200 thousand visitors who have interacted with species such as dolphins, sea lions and dromedaries. 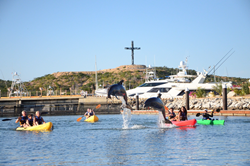 Dolphin Discovery Los Cabos, the beautiful natural habitat located in San José del Cabo, Baja California Sur, belonging to the family of The Dolphin Company, yesterday celebrated 10 years of having opened its doors. Since then, more than 200 thousand visitors from different parts of the world such as the United States, Mexico and Canada, among others, have lived the wonderful experience of carrying out educational interactions with species such as dolphins, sea lions and dromedaries.

Dolphin Discovery Los Cabos is located in the beautiful Marina Puerto Los Cabos, just 25 minutes from Cabo San Lucas, and offers a privileged view of the union between the Pacific Ocean and the Sea of ​​Cortez. It is also home to 5 beautiful dolphins, 3 sea lions, among which is one that was rescued, and 6 dromedaries, with whom visitors can interact through educational programs that seek to raise awareness about the care of the environment and species that inhabit it.

It is worth mentioning that Dolphin Discovery as a brand turned 26 years old last December. Its first dolphin habitat opened on Isla Mujeres in 1994 and now has 12 habitats under that name in Mexico and the Caribbean islands. As important information about Dolphin Discovery Los Cabos are the following: