The Presidential Suites Cabarete, a new project by the Lifestyle Group, is an all-inclusive luxury resort in Puerto Plata that is expected to bring hundreds of jobs to the area. 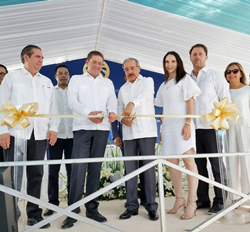 Only this year, which is almost over, our contribution to the treasury will be around one billion pesos, in addition to the four billion we contributed in the last five years.

The Lifestyle Group is proud to announce the inauguration of its newest hotel project, the Presidential Suites Cabarete, in Puerto Plata. The inauguration celebration took place in December and was attended by Dominican Republic President, Danilo Medina, who later toured several apartments of the newly opened complex after the ribbon cutting.

Francisco Javier Garcia, Minister of Tourism, gave the signature remarks of the event on the growth of tourism in Puerto Plata. The Lifestyle Group is proud to have one of the highest levels of occupation in the area. Finally, Julio Cesar Corniel Amaro, Bishop of the Diocese of Puerto Plata, gave the blessing of the project.

In addition to these important Dominican Republic dignitaries and other government officials and representatives of the sector, the event was attended by Markus Wischenbart and Anja Wiscenbart, President and Vice President of the Lifestyle Group. They were joined by Patrick Sleezer, a representative from the Wynn Group, a Canadian investment group that was responsible for the construction of the project.

Markus Wischenbart said that he will continue to invest in the Dominican Republic as it offers a stellar investment environment that President Danilo Medina helped foster and can bring many jobs and economic growth to the area.

"Only this year, which is almost over, our contribution to the treasury will be around one billion pesos, in addition to the four billion we contributed in the last five years," he said.

About Wynn Group of Companies: Wynn Group of Companies is an important family group with broad interests in Canada in the real estate industry, solar energy, gyms and others. In his first incursion into Dominican territory he has chosen the Lifestyle group to establish a strategic alliance that is expected to be the first of other investments as a whole.