Donald Craig Miller’s newly released “Terror Outside the Door: (The Persecution of Jesus Christ)” is a mystery story surrounding the aftermath of the death of Christ 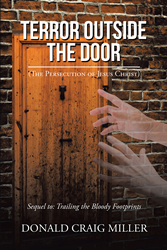 Miller writes, “For first-century private detective, Jake Jezreel, it was the best of times. He had just wrapped up a scintillating investigation he called ‘The Case of Trailing the Bloody Footprints.’ Jake had met Jesus Christ in the midst of that investigation. He had surrendered his life to Christ. And Jake’s life never would be the same again.

“But suddenly, in the afterglow of those joyous days after Jesus’s resurrection, the world collapsed in on top of Jake. It abruptly became the worst of times. Religious persecution descended upon the Christian church in Jerusalem, led by the chief priests and zealous leaders, wreaking havoc upon all Christ’s believers.

“In the midst of this persecution, a new and savage animal sprang up, whose name was Saul of Tarsus. Saul attacked the Christian church with a vengeance, aiming to wipe the Christian ‘cult’ from the face of the earth. Jake found himself and his faithful secretary, Hannah, caught in the onslaught and on the run. The persecution was crashing in all around them. Christians were being imprisoned. Some were being brutalized. Some were being killed. For the moment, Jake and Hannah stayed one jump ahead of the devouring enemy. But how long could they avoid the clutches of the vicious mob chasing after them?

“Wherever they hid, the terror prowled right outside the door. Could Jake and Hannah somehow dodge the relentless menace? If they were caught, what brutal tactics would the authorities savage upon them? Jake knew that in a crossfire, there is nowhere to hide. He also knew that time was running out and the walls were slowly closing in upon them.”

Published by Christian Faith Publishing, Donald Craig Miller’s new book shares his great desire to dig scriptural truth from the Bible and pass it on to other Christians, much like Ezra of the Old Testament.

View a synopsis of “Terror Outside the Door: (The Persecution of Jesus Christ)” on YouTube.

Consumers can purchase “Terror Outside the Door: (The Persecution of Jesus Christ)” at traditional brick & mortar bookstores, or online at Amazon.com, Apple iTunes store, or Barnes and Noble.

For additional information or inquiries about “Terror Outside the Door: (The Persecution of Jesus Christ),” contact the Christian Faith Publishing media department at 866-554-0919.