Donald Evans’s newly released “Demonization Brought Spiritual Conflict upon This Nation!” is a story that gives the readers strength and courage to overcome demons

“Demonization Brought Spiritual Conflict upon This Nation!” from Christian Faith Publishing author Donald Evans is an engrossing account that aims to open the minds and eyes of the readers, as well as to motivate believers and non-believers to defend and protect themselves from the demon spirits that live inside them. 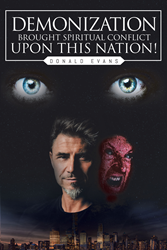 Evans writes, “People of all genders and ages of the nation and all nations throughout the land is at war with invisible spirit beings, spirit enemies, demonic forces, and demon spirits within themselves, internally and externally in spiritual warfare, living and fighting among demonic forces in all areas of life without one’s knowledge.

“Demon spirits are not made of flesh and blood. They are the invisible enemies in the physical realm and biologically in the spirit realm. Demonization covers all areas of human lives and all levels of governments, even our own.

“Only Jehovah God’s Word, the Holy Bible, can we, mankind, have victory over the invisible spirit enemies (adversaries) of the earth and in our governments at all levels.”

Published by Christian Faith Publishing, Donald Evans’s new book is an insightful book that is full of revelations that the world population is experiencing that are demonically controlled without human knowledge.

With this purpose, Evans aims to open the minds and eyes of the readers through the many spiritual encounters and confrontations the author has experienced over the years with invisible spirit beings—the demons.

View a synopsis of “Demonization Brought Spiritual Conflict upon This Nation!” on YouTube.

Consumers can purchase “Demonization Brought Spiritual Conflict upon This Nation!” at traditional brick & mortar bookstores, or online at Amazon.com, Apple iTunes store, or Barnes and Noble.

For additional information or inquiries about “Demonization Brought Spiritual Conflict upon This Nation!,” contact the Christian Faith Publishing media department at 866-554-0919.