Donald L. Gilleland’s newly released “Watching My Wife Die” is a memoir of the author’s experience in struggling to surpass the pain he felt after losing his wife

“Watching My Wife Die: A True Story: A Christian Perspective on Grieving” from Christian Faith Publishing author Donald L. Gilleland is a poignant account that talks about the grieving journey of a husband after losing his wife who suffered from cancer. 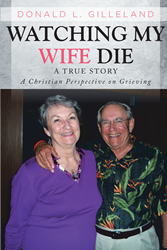 Gilleland writes, “This book is a discussion of metastatic ovarian cancer which my wife struggled with for more than a year and a discussion of my struggle with grief from watching my wife slowly die over the same period. Interwoven throughout the book are various forms of Christian witness as they related to these struggles.

“Donald served thirty years in the US military, followed by ten years in the defense industry, retiring as corporate director of public affairs for General Dynamics Corporation in 1994. He also has written and had published over 600 major articles in a variety of nationally and internationally circulated magazines and newspapers and is the author of five books, all of which are available on the Internet or directly from him. Peggy worked as a corporate management analyst until 1981, after which she decided to devote her full-time effort to helping the various communities in which they lived.”

Published by Christian Faith Publishing, Donald L. Gilleland’s new book is an enthralling journal that opens the readers’ eyes allowing them to see and be inspired by how the faith of a husband saved him from the pain he was feeling after losing a wife who had metastatic ovarian cancer.

With this purpose, Gilleland aims for the readers to treasure every moment they have with their loved ones and to also be aware that cancer is not just an ordinary illness that a person can take in surviving life.

View a synopsis of “Watching My Wife Die: A True Story: A Christian Perspective on Grieving” on YouTube.

Consumers can purchase “Watching My Wife Die: A True Story: A Christian Perspective on Grieving” at traditional brick & mortar bookstores, or online at Amazon.com, Apple iTunes store, or Barnes and Noble.

For additional information or inquiries about “Watching My Wife Die: A True Story: A Christian Perspective on Grieving,” contact the Christian Faith Publishing media department at 866-554-0919.