Donald R. Dragovich’s newly released “21 Days: The Random Thoughts of a Brother in Mourning” is a heart-wrenching memoir of the author who grieves after losing a brother.

“21 Days: The Random Thoughts of a Brother in Mourning” from Christian Faith Publishing author Donald R. Dragovich is a poignant account that tells a story of a grieving man who lost his brother to esophageal cancer. 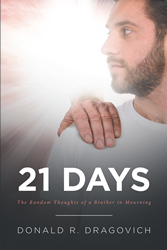 Dragovich writes, “21 Days is the chronological countdown to David’s death as described by his brother, Donald. His written thoughts document what was happening to his brother David as he quickly succumbed to esophageal cancer. Donald describes his emotional turmoil in dealing with his brother’s untimely and unstoppable death. He asks a powerful, rhetorical question that makes everyone ponder their mortality. What would you do if doctors told you, you or a loved one only have twenty-one days to live? How would you react? Donald reacted by questioning his faith in God and God’s power over cancer during this countdown.

“Donald’s brother David was given twenty-one days to live on September 29, 2015. In dealing with the reality of his oldest brother’s death, Donald expressed his feelings by writing down what happened each day and how he felt. He describes how he cursed at God, questioned God’s divine intervention, and even God’s existence because no prayers were answered, no miracle cure and no death reprieve were in sight. Donald refers to esophageal cancer that David had as an evil demon. He shows his anger and disgust with cancer and how it destroys not only a person but a family. He expresses his torment and anguish as he counts down the days, but in the end, ultimately embraces his spirituality.

Published by Christian Faith Publishing, Donald R. Dragovich’s new book is an engrossing narrative of the author’s experience of coping with the heartbreak he had after losing his brother.

This book describes other instances of spirituality that Dragovich has experienced and how he turns these tragic events into faith-renewing experiences.

View a synopsis of “21 Days: The Random Thoughts of a Brother in Mourning” on YouTube.

Consumers can purchase“21 Days: The Random Thoughts of a Brother in Mourning” at traditional brick & mortar bookstores, or online at Amazon.com, Apple iTunes store, or Barnes and Noble.

For additional information or inquiries about “21 Days: The Random Thoughts of a Brother in Mourning,” contact the Christian Faith Publishing media department at 866-554-0919.