Buyeo, a historical Korean city, will be the world's first "Hologram City" powered by DoubleMe's TwinWorld, a social mixed reality platform. DoubleMe, Buyeo City, and its citizens will participate in building the city-scale social mixed reality experiences from early 2021. 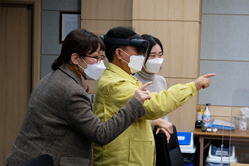 "We're so excited to transform this historic city into the next generation immersive landscape," said Albert Kim, CEO of DoubleMe.

DoubleMe, the creator of the social mixed reality (MR) platform TwinWorld, announced their official partnership with a historical South Korean city, Buyeo, on transforming the city into the world's first "Hologram City."

DoubleMe demonstrated TwinWorld, a social mixed reality platform, to Park Jeong-Hyun, the mayor, and his officers from the city hall's cultural and tourism department. They discussed the detailed plan for the "Hologram City" project, a city-scale social mixed reality experience starting from next year.

“Using simple and free tools, this will be the world's first attempt to build a city-scale social mixed reality experience created by citizens,” said Mayor Park. “In an era of contactless technology, this is a great opportunity to spread the culture of Buyeo to the world.”

With TwinWorld, citizens can build infinite layers of mixed reality experiences onto the city, creating an entire area that combines the sandbox gameplay of Minecraft with the AR and geolocation applications of Pokémon GO.

"Buyeo once was the capital of Baekje (BC 18 ~ AD 677), an ancient Korean kingdom known for technology and global cultural exchange," said Albert Kim, CEO of DoubleMe. "We're so excited to transform this historic city into the next generation immersive landscape."

While all existing AR and MR platforms force the users to consume pre-designed content, TwinWorld is all about "user-generated immersive experiences."

To achieve this goal, DoubleMe will provide TwinWorld, its social holographic reality platform, and headsets such as the HoloLens 2 and Nreal to students and other community members in Buyeo. This will allow citizens to design and share mixed reality content such as 3D models, texts, videos, and audio with other users.

Additionally, DoubleMe will host a "Hologram City Design Hackathon" during the 67th Baekje Cultural Festival next year. Students from all over the world will participate and design memorable holographic experiences and help promote the beauty of Baekje culture globally.

For those who don’t live in South Korea but still want to see the city for themselves, DoubleMe will use their 3D spatial scanning technology to develop life-size models, or digital twins, of Buyeo and its holographic contents. Viewers will then be able to remotely have walk-through experiences of the city, which will be made available via TwinWorld in mid-to-late 2021.

DoubleMe is also working with 12 major global telecom carriers such as BT, Deutsche Telecom, SingTel, and Vodafone to commercialise the 5G holographic telepresence. With these partnerships, DoubleMe will implement “Hologram Cities” in different countries next year.

DoubleMe team member demonstrates the TwinWorld's use outdoors while wearing the HoloLens 2 headset.

DoubleMe team member demonstrates TwinWorld to an officer from the Buyeo's cultural and tourism department at city hall.

DoubleMe demonstrates TwinWorld to Buyeo's mayor and his officers from the city hall's cultural and tourism department.

DoubleMe CEO Albert Kim explains the "Hologram City" project to Buyeo mayor and his officers from the city hall's cultural and tourism department.

DoubleMe CEO Albert Kim explains the "Hologram City" project to Buyeo mayor and his officers from the city hall's cultural and tourism department.