Small towns in the Tennessee River Valley are the heart of community, history, and commerce. Downtown Paris, TN continues their bicentinnial anniversary with a month-long celebration of holiday festivities that illuminate the spirit of the community and season. 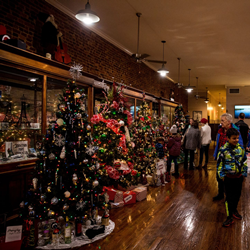 Downtown Paris square is built around a 125-year-old, majestic courthouse that’s at the center of everything- ive music, food, festivals, parades and bustling shops housed in picturesque buildings reminiscent of an earlier time.

No one enjoys history more than Santa, after all, he’s been around a long, long time. That’s probably why this jolly, old elf is so smitten with historic Downtown Paris, especially at Christmas.

Twinkling in the crisp air, the town’s square is built around a 125-year-old, majestic courthouse that’s at the center of everything Santa adores - enticing murals, live music, food, festivals, parades and bustling shops housed in picturesque buildings reminiscent of an earlier time. Constructed in 1896, this is the oldest, working courthouse in West Tennessee and the backdrop for Christmas in Downtown Paris.

The Peppermint House
Santa’s jolly red and white, peppermint house decorates the northwest corner of the welcoming courthouse lawn where the big man spends every weekend from Thanksgiving till the Sunday before Christmas. Here is where children whisper their wish list in Santa’s ear, sing songs with Mama Claus and pose for endearing photos that will adorn family Christmas cards and social media posts throughout the season.

North Pole Family Fun Day
The events that arrive with Santa are as exciting as treasures pouring from a Christmas stocking. In fact, these seasonal happenings have their own designation, Downtown Unwrapped. First comes North Pole Family Fun Day, when Santa and Mama Claus arrive at the peppermint house the morning after Thanksgiving. Visits with Santa and Mama Claus, shopping for that perfect gift and stopping for hot cocoa, freshly baked cookies and candies create family memories that last a lifetime.

Festival of Trees
Also opening that day is the Festival of Trees. Step into the Old 5 & 10 Event Center with its high ceilings and brick walls to warm up in the glow of festive evergreens dressed for the season. Created by artisans, children, local businesses, and churches, these trees are worthy of every ooh and aah they receive. Go ahead and snap a picture; these trees create a charming back for the kiddos.

Light Up Paris!
This Downtown Unwrapped event takes place not only on the square but throughout the community. “Light Up Paris - Christmas Lights Tour” is a tip of the hat to the town’s namesake, Paris, France - the City of Lights. Beginning November 26, the Light Up Paris site takes “riding around to look at Christmas lights” to a whole new level.

With Light Up Paris, there’s no getting lost or wondering how long it will take to get there. Homeowners post their addresses to a website that directs folks right to their festively decorated houses. “It’s like a personal invitation to view their hard work and creativity,” says Travis McLeese, Chamber of Commerce. “And don’t miss Eiffel Tower, Park” he adds. “Everyone will love the tower’s new Christmas decoration.”

200 years and counting
Paris is in the midst of its bicentennial celebration, so it’s no surprise that several of the Downtown Paris churches date back more than a century. In recent years, their close proximity to one another sparked the idea of the Downtown Paris Advent Walk. On the evening of December first, downtown houses of worship invite the community and visitors to stroll together from church to church and hear the poignant story of the first Christmas.

There's more!
The excitement continues on Saturday, December 11 when Santa hosts the Downtown Unwrapped Christmas Festival. Along with spectacular shopping, this event comes with the North Pole climb; a lighted, trackless train ride; Christmas movies on the big screen; food trucks; and more.

This evening also shines a spotlight on the Downtown Fountain Plaza where an enormous Christmas tree and thousands of lights fill every inch of this park with joy. True to the town’s appreciation of its past, there is history among these lights. Embedded plaques in the walkways tell the stories of some of famous citizens.
Time’s flying

In 1955, Elvis Presley performed at the City Auditorium in Paris. More than six decades later on Saturday, December 18, one of the country’s finest Elvis tribute artists takes the stage at the Krider Performing Arts Center. Join Travis LeDoyt in an unforgettable Elvis Christmas Tribute Concert, but hurry…tickets go fast when the King is in town.

The big events may be almost over, but there’s still time to find that ellusive gift in one of downtown’s charming shops, share a cup of Christmas coffee with a friend or let the little ones visit with Santa. Even if the kiddos have already seen the big man in red, they may need a do-over. Fortunately, ol' Santa has a sympathetic ear, at least until Sunday afternoon, December 19, and then it’s time to fly North!

Have a wonderful holiday season. Go downtown and shop local,

The TRV Stewardship Council is a nonprofit comprised of destinations committed to environmental stewardship, social responsibility, and economic prosperity within the Tennessee River Valley. The mapguide is supported by the generosity of the Tennessee Valley Authority (TVA), volunteer members consisting of Chambers of Commerce, Convention & Visitors Bureaus, businesses, and individuals. Learn more by visiting the web site at http://www.ExploreTRV.com.