Dr. B. Sky’s newly released “Slaying the Giant: Uncovering the Things They Like to Hide” is a gripping account of one doctor’s steps against opioid over prescription

“Slaying the Giant: Uncovering the Things They Like to Hide” from Christian Faith Publishing author Dr. B. Sky is an eye-opening account of the author’s work towards standing up to those that would permit the opioid epidemic to spiral further out of control. 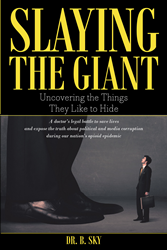 Dr. B. Sky shares, “The agency employs many dedicated employees modeling the institution’s core values of integrity, commitment, advocacy, and respect. Other employees wear the values on their coat pockets but fail to incorporate the admirable values into their hearts. Unfortunately, these other employees often occupy positions of power and deflect fatalistic publicity onto unsuspecting innocent targets, scapegoats. I became a scapegoat during the nation’s opioid epidemic. Following the shocking realization that the facility’s executives blamed me for undesirable media and political inquiries, I knew I couldn’t support the institution. The condemnation, finger-pointing, and retaliatory scrutiny became insurmountable. Worst of all, the crippling falsified accusations and distressing attention left me defenseless to protect patients and the community. I became a whistleblower disclosing unsafe opioid practices within the institution and beyond.

As I reflect, I became a whistleblower long ago. As the hospital’s opioid safety expert, I partnered with other clinicians and continuously educated executives about the existence of an opioid epidemic. Patients and people in the community experienced unintentional overdose and death because of unsafe prescribing and lack of monitoring by the agency. Our safety group educated leaders of the hospital, the community, and politicians about our concerns. Few executive leaders and politicians listened. Some listened but didn’t like what they heard and intentionally chose to ignore cries for change.

This true story uncovers the things they (disreputable leaders, politicians, and media personnel) like to hide about scandalous maneuvers by people in positions of power to deflect blame onto others when they face unsolicited investigations which would end careers and reflect poorly on the agency. Slaying the Giant, Uncovering the Things They Like to Hide outlines the tedious process of preparing for court, my testimony, testimonies by others, my attorneys’ brilliant performances, and the aftermath of a whistleblowing process that took years to unfold.”

Published by Christian Faith Publishing, Dr. B. Sky’s new book expertly details the dangers of negligent opioid prescription and the steps taken to protect the public from overzealous prescribers.

With an honest voice, Dr. B. Sky invites readers to experience the retaliation and subterfuge experienced while going against some of the biggest names in healthcare.

Consumers can purchase “Slaying the Giant: Uncovering the Things They Like to Hide” at traditional brick & mortar bookstores, or online at Amazon.com, Apple iTunes store, or Barnes and Noble.

For additional information or inquiries about “Slaying the Giant: Uncovering the Things They Like to Hide”, contact the Christian Faith Publishing media department at 866-554-0919.