Dr. Brian Byrne’s newly released “Identity: The Way of a Disciple” explains the definition of true discipleship in the Christian setting

“Identity: The Way of a Disciple” from Christian Faith Publishing author Dr. Brian Byrne is a scholarly exposition of Christian discipleship and its impact on individual, religious, and communal lives. 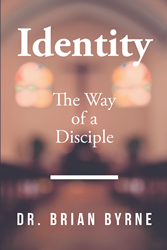 “Identity: The Way of a Disciple”: an astute opus that examines the importance of genuine discipleship as written and defined in the Holy Bible. “Identity: The Way of a Disciple” is the creation of published author Dr. Brian Byrne, a disciple of Christ and the founder and past international director of School for Disciples. He has retired and passed over his responsibilities to national leaders.

Dr. Byrne shares, “In the beginning they were called disciples, and the early believers knew what the word meant. Disciples were those who trusted the Lord, knew His voice, followed Him wherever He led them, and were obedient to everything He told them to do."

“Then a Roman government official in Antioch invented a new name. He called the disciples in this church Christianoi. Christian and the identity of disciples slowly began to disappear. Today only one, the term Christian, is widely used in churches around the world. But even this name has been interpreted in as many ways as there are church denominations."

In his book, Dr. Brian has examined each of the six names for disciples that the scriptures use: sinner, saint, child of God, Christian, disciple, bondslave. He treats each of the six names not merely as useful information but as teachings that can profoundly influence the lives of those who long to be the Lord’s disciples.

In his final chapters, Dr. Brian takes a careful look at what the cross means for disciples. He presents a number of valuable biblical principles that both inform and challenge those who long to follow the Lord as His disciples in the twenty-first century.

Published by Christian Faith Publishing, Dr. Brian Byrne’s new book inspires readers to unceasingly pursue the divine truth and wisdom in life and become God’s willing disciples dedicated to spreading his message of love and salvation to the world.

This book presents compelling notions that emphasize the necessity of understanding one’s spiritual conviction to improve one’s stewardship to God. There is a second book to come out called, “Disciple, Beyond Mediocrity,” which will explore what it means to be a disciple in a greater depth.

View the synopsis of “Identity: The Way of a Disciple” on YouTube.

Consumers can purchase “Identity: The Way of a Disciple” at traditional brick-and-mortar bookstores or online at Amazon.com, Apple iTunes store, or Barnes and Noble.

For additional information or inquiries about “Identity: The Way of a Disciple,” contact the Christian Faith Publishing media department at 866-554-0919.