Charles E. Crutchfield III, M.D.'s assistant, Kelly, was stunned when she stepped into his office and found him holding two Barbie Dolls on his desk. 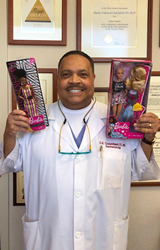 "I'll gladly take a little ribbing from friends and colleagues if it gets us closer to a world where no child is afraid to leave home because of a skin or other condition." - Charles E. Crutchfield III, M.D.

Charles E. Crutchfield III, M.D.'s assistant, Kelly, was stunned when she stepped into his office and found him holding two Barbie Dolls on his desk.

"Wow, Dr. Crutchfield! I didn't know you were into Barbie Dolls," she commented with a disbelieving smile.

An Eagan, Minnesota, dermatologist, Dr. Crutchfield, responded, "Well, I didn't know I was into Barbie Dolls until the recent release of the 'Fashionista' line of Barbie Dolls that are diverse and inclusive. As you know, at Crutchfield Dermatology we specialize in the treatment of vitiligo and alopecia. I'm particularly impressed with these new dolls that feature vitiligo and alopecia. I plan on showing them to some of my patients with those conditions. "

A staple of American culture since 1959, Barbie kicked off the new decade with a renewed push for more diverse and inclusive offerings. According to a recent report on CNN, Mattel unveiled its Fashionistas 2020 collection to show off "a multidimensional view of beauty and fashion."

The new range of dolls includes one with vitiligo. Recently, vitiligo was brought to the public's consciousness by supermodel, Winnie Harlow. Vitiligo is a condition that causes the loss of skin pigment in blotches. Many patients with vitiligo experience self-consciousness and concern about being in public. When an icon like Barbie shares the condition, it goes a long way toward soothing that insecurity.

Mattel notes in a recent press release that "offering a doll with vitiligo in our main doll line allows kids to play out even more stories they see in the world around them." The company worked with a dermatologist to make sure vitiligo was represented adequately in the design of the new doll. In addition to vitiligo, the other Barbie in Dr. Crutchfield's office is made with hair loss, reflecting the realities of skin conditions called alopecia.

Dr. Crutchfield explained to Kelly that this wasn't the first time Barbie showed empathy for the millions of children with personal characteristics unique from the original Barbie. "In 2019, Barbie introduced dolls with disabilities," he continued. "One has a prosthetic limb, and another uses a wheelchair."

Her teasing concluded, Kelly told Dr. Crutchfield she was utterly impressed by the updated Barbie she knew as a girl. The 21st Century version is now more diverse and inclusive.

"They have really resonated with my patients when I show them the dolls," Dr. Crutchfield responded.

And show them he does.

"One of my adult patients with vitiligo started crying when she saw the doll. She told me she was teased so much as a child that she didn't want to leave home. If she had that Barbie, she would have shown the other kids she was just one individual in a diverse world, and maybe they would not have bullied her that way."

Dr. Crutchfield is happy to show off his new love of Barbie Dolls, especially since he specializes in the treatment of vitiligo and alopecia.

"I'll gladly take a little ribbing from friends and colleagues if it gets us closer to a world where no child is afraid to leave home because of a skin or other condition."

About Charles E. Crutchfield III, M.D.:
Charles E. Crutchfield III, M.D. is a graduate of the Mayo Clinic Medical School and a Clinical Professor of Dermatology at the University of Minnesota Medical School. He currently is the Medical Director of Crutchfield Dermatology in Eagan, (serving the greater Minneapolis-St. Paul area), Minnesota. Dr. Crutchfield is an annual selection of the "Top Doctors" issue of Mpls. St. Paul magazine. He is the only dermatologist to have been selected as a "Best Doctor for Women" by Minnesota Monthly magazine since the inception of the survey. Dr. Crutchfield has been selected as one of the "Best Doctors in America," an honor awarded to only 4% of all practicing physicians. Dr. Crutchfield is the co-author of a children's book on sun protection and dermatology textbook. He is a member of the AΩA National Medical Honor Society, an expert consultant for WebMD and CNN, and a recipient of the Karis Humanitarian Award from the Mayo Clinic School of Medicine. Dr. Crutchfield was also given "first a physician" award, Healthcare Hero, 100 most influential healthcare leaders in Minnesota, and one of the Top 100 African –American Newsmakers in the United States by TheGrio, an affiliate of NBC News. https://en.wikipedia.org/wiki/Grio_Awards