More than 360 youth received nutritional support at Don Bosco Kansebula, located in Lubumbashi, Democratic Republic of the Congo, thanks to donor funding from Salesian Missions. 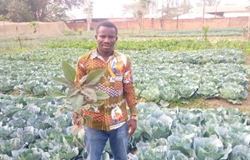 More than 360 youth received nutritional support at Don Bosco Kansebula, located in Lubumbashi, Democratic Republic of the Congo*, thanks to donor funding from Salesian Missions, the U.S. development arm of the Salesians of Don Bosco.

Youth benefiting from this food were ages 6-22. Many are are in secondary school and college as well as 82 young Salesians studying at Don Bosco Kansebula. Single mothers from the villages also received this donation. The goal was to provide ongoing balanced nutrition for young Salesians and other vulnerable youth.

One of the beneficiaries was Kyundundu Mbilizi Fabrice, who is 25 and in high school, Fabrice said, “I studied agriculture in the eastern part of the Democratic Republic of the Congo at Uvira. Now, I am at Kansebula as Salesian of Don Bosco in post-novitiate. At Kansebula, we have a garden and we produce vegetables and keep some domestical animals. Villages and confreres have benefited from what is produced in the garden and in the farm as well. I am really happy for what our benefactors are doing for us in order to fight hunger and I encourage them to continue in that direction.”

Salesian missionaries have been working in the Democratic Republic of the Congo for more than 100 years ensuring that the most vulnerable children are not forgotten. Salesian primary and secondary schools and programs lay the foundation for early learning while Salesian trade, vocational, and agricultural programs offer many youth the opportunity for a stable and productive future.

Despite its vast material wealth, the Democratic Republic of the Congo has long been a very poor nation. Half of the country’s population lives below the poverty line, living on less than $1 a day, especially those in rural communities. Because of ongoing strife and violence within the country, more than 8.5 million people are in urgent need of humanitarian assistance. More than 4.1 million Congolese are now displaced, with 620,000 seeking refuge in neighboring countries. More than 7.5 million people do not have enough food to eat.

*Any goods, services, or funds provided by Salesian Missions to programs located in this country were administered in compliance with applicable laws and regulations, including sanctions administered by the U.S. Department of Treasury’s Office of Foreign Asset Control.

###
About Salesian Missions USA
Salesian Missions is headquartered in New Rochelle, NY, and is part of the Don Bosco Network—a worldwide federation of Salesian NGOs. The mission of the U.S.-based nonprofit Catholic organization is to raise funds for international programs that serve youth and families in poor communities around the globe. The Salesian missionaries are made up of priests, brothers and sisters, as well as laypeople—all dedicated to caring for poor children throughout the world in more than 130 countries and helping young people become self-sufficient by learning a trade that will help them gain employment. To date, more than 3 million youth have received services funded by Salesian Missions. These services and programs are provided to children regardless of race or religion. For more information, go to SalesianMissions.org.