Dr. Guillermo Escamilla’s newly released “Evolution Equals Genesis” is a captivating piece shedding light on how Genesis and Evolution complement each other

“Evolution Equals Genesis” from Christian Faith Publishing author Dr. Guillermo Escamilla is an educational work written to spark discussions on how the seven days of Creation mirrors the series of developments in Evolution. 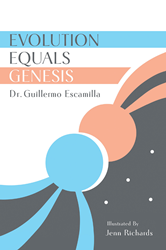 “Evolution Equals Genesis”: a fascinating tome penned in hopes to spark a sense of wonderment and curiosity in the correlation between the story of Creation in the book of Genesis and the theory of Evolution. “Evolution Equals Genesis” is the creation of published author Dr. Guillermo Escamilla, a graduate of Bachelor’s Degree in Neurobiology and Behavior. He also obtained a Doctorate in Chiropractic Degree. Currently, he is an adjunct professor in the Science Department at St. Joseph’s College in Patchogue, New York.

Dr. Escamilla shares, “I imagine that from the moment humans were able to communicate, they have contemplated their place in Creation in this universe. Stories handed down from parents to children, elders to tribes, teachers to pupils, and civilization to civilization about the story of Creation. Countless versions throughout human history all try to explain our place in existence. Two such versions are in Genesis and the Theory of Evolution. These have been the most hotly debated versions in recent history. It is the purpose of this book to show the reader how the seven days of Creation, written in the book of Genesis, can be matched to the sequence of events in evolution. It is my hope that a new debate can be born of this. The debate of how Genesis and evolution are more similar than they are different. Similarly, it is my wish to create a sense of wonderment and curiosity to things spiritual and science.”

Published by Christian Faith Publishing, Dr. Guillermo Escamilla’s new book is a thought-provoking piece that tickles the curiosity of the readers with regards to the relationship between two of the most well-known accounts of humankind’s origin.

View a synopsis of “Evolution Equals Genesis” on YouTube.