Dr. Lawrence E. Henry Ed.D’s newly released “Ethiopia” is a potent read that explores Ethiopia’s role in the story of the Almighty God

“Ethiopia: Saving Christianity for the Kingdom of Heaven: The Untold Story” from Christian Faith Publishing author Dr. Lawrence E. Henry Ed.D dives into the captivating tale of Ethiopia and its people as they work for God’s Kingdom and spread Christianity across the lands. 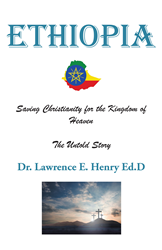 Dr. Henry shares, “This book is a systemic examination of prophecies and instructions to Ethiopia by God. They show how God used Ethiopia to ensure the continuation of the chosen people, supporting the kingdom of heaven.

“There are many prophecies and signs specifically referenced to Ethiopia and the Ethiopian people. In many verses, Ethiopia is specifically addressed to come to the aid and/or support prophets spreading Christianity.

“It would be hard to overstate the impact of Ethiopia on the advancement of Christianity. For example, King Tirhakah, the Ethiopian king of Egypt/Ethiopia, intervened to save Judah in the year 620 BC. This event is well documented in the Bible and other ancient writings.

“If we fast-forward two thousand years, we find the Ethiopian Church of today that has a membership of between 40 and 46 million; Christians which make up about 60 percent of the total population of the country.

“Ethiopia was also the first country to declare Christianity a state religion and had never been occupied by a foreign country.

“This book will explain how God commissioned the Ethiopians to work for the kingdom of God and to spread Christianity geographically and ethically to the ends of the earth.

“The relationship between God and the Ethiopia people represent the greatest story never told until now. Writing this book was a very difficult task; I relied on the Lord and his wisdom. I was guided by Philippians 1:6: ‘Being confident of this, that he who began a good work in you will carry it on to completion until the day of Christ Jesus.’ This book represents a story that needed to be told and God-inspired.”

Published by Christian Faith Publishing, Dr. Lawrence E. Henry Ed.D’s new book is an eye-opening manuscript that will fascinate readers with the story of Ethiopia. Their significance in the religious community has been ignored, until now, where one will see how their story is worth telling to the masses.

View a synopsis of “Ethiopia: Saving Christianity for the Kingdom of Heaven: The Untold Story” on YouTube.

Consumers can purchase “Ethiopia: Saving Christianity for the Kingdom of Heaven: The Untold Story” at traditional brick & mortar bookstores, or online at Amazon.com, Apple iTunes store, or Barnes and Noble.

For additional information or inquiries about “Ethiopia: Saving Christianity for the Kingdom of Heaven: The Untold Story,” contact the Christian Faith