Dr. Louis Toth’s new book “Beware of the Man with Only One Religious Book! He Is Incapable of Knowing the Truth” is a thought-provoking work for devout readers

Recent release “Beware of the Man with Only One Religious Book! He Is Incapable of Knowing the Truth” from Page Publishing author Louis Toth, Ph.D is a scholarly exploration of the written records of the great religions, and an exhortation to any person of faith to determine the historical truths they reveal by a reasoned comparison of multiple texts. 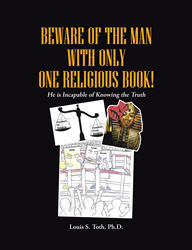 Louis Toth, Ph.D, is an Indiana native, US Air Force veteran, and son of Pentecostal ministers who has earned advanced degrees in multiple scientific disciplines and now lives in California with his wife of more than fifty years. He has published his new book “Beware of the Man with Only One Religious Book! He Is Incapable of Knowing the Truth”: a contemplative discussion of dogma and faith.

The author writes, “The thesis of this book is that people and religions that have one religious book as guidance cannot be true (in the larger sense of shared truth) and that government that are faith-based cannot represent all the people. Free and open discussions and serious debate are essential for arriving at truth and democratic government. And religion is detrimental to world peace.

The discussions presented assert that: there are many religions and that ALL their gods are ‘pretend’ (given arbitrary characteristics), and new gods/religions have been easily made by many persons who visit the desert, wilderness, mountain-top, or any place of solitude where they were able to receive god’s calling without witnesses, and then they decree that god wants to speak through them (and only to them) and echoed by their appointed priests. If they can get gullible people to follow them and their god’s rules, they can establish their own religion (and warriors).

The primary focus of the book’s discussions will be to establish ‘ground rules’ for establishing ‘truth’. Then as examples, discussions are presented with other explanations of “miracles” in order to reconsider some of the Bible dogma specifically attributed to Jehovah, Moses, Passover, and the roles of all the gods involved in the story of the Exodus.

The Bible (or Torah) may tell a different story when we discount miracles and explain them with other real possibilities. The conclusions may be different when we explore the plausibility that 1) Moses was the son of Pharaoh Amenhotep IV (later called Akhenaten who converted Egypt to a monotheistic religion) and Jochebed (a lesser wife—if married at all) and that 2) Moses was an Aten Priest who killed King Tut. The Exodus (and Adam and Eve) would have different explanations if Jehovah were not invented until on Mount Sinai in 1311 BCE (Before the Common Era) . . . not ‘In the Beginning’ of the existence of the world. Also, the Passover, ‘the Jews’ took in leaving Egypt would be logical if one sees Moses’ attempt to assert his claim to the pharaoh throne. And the Jews wandering in the desert would be reasonable if one considers that they were advised and supported by Moses’ father-in-law, Jethro, who was the nomadic high priest of the Druze religion (also a monotheistic type).

These possibilities are herein explored in some detail, and the events are presented with a ‘psychological history’ that includes the back stories, motivation, and relationships behind the characters and events. These discussions encourage rational thought and open-mindedness.”
Published by Page Publishing, Louis Toth’s engrossing book is a scientific exploration of accepted religious truths found across the sacred texts of multiple faiths.
Readers who wish to experience this engaging work can purchase “Beware of the Man with Only One Religious Book! He Is Incapable of Knowing the Truth” at bookstores everywhere, or online at the Apple iTunes store, Amazon, Google Play, or Barnes and Noble.