Dr. Robin Unger, hair transplant doctor in New York, NY discusses the Black Market of Hair Transplants. There are horrible mistakes that can occur during or after a hair transplant, some of these may even be irreversible. In the discussion below, Dr Unger and other doctors share some of the horrors due to the steady increase in unskilled "providers" of hair transplant surgery around the world. 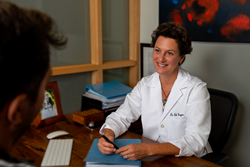 Dr Robin Unger in a detailed consultation with her patient

Doctors dedicated to the ethical practice of hair restoration should stop fighting amongst themselves and focus on the real problem – the thousands of patients who will be harmed or misled by doctors claiming to perform “state of the art” hair transplant.

Below is a cyberchat was partially excerpted from a WhatsApp group to which she belongs. This is a particularly important topic to share, given the steady increase in “providers” of hair transplant surgery around the world.

The Black Market group is composed of ISHRS doctors who are opposed to the unlicensed and unethical practice of medicine and wish to preserve the integrity of their field. The group was formed after the announcement of this initiative at the most recent ISHRS meeting in Los Angeles. Physicians included in this conversation perform hair restoration around the globe: Australia, US, UK, Europe, Turkey, Central America and South America, Brazil, and Egypt. Unfortunately, the problem of the practice of unsupervised and/or untrained hair transplantation is increasing at a rapid pace. This is not a problem restricted to one country, but is becoming a global problem.

It is important to consider how this situation evolved. When Dr Robin Unger began training in the field of hair restoration, a surgical procedure required an experienced doctor and a relatively large and well-trained staff to produce a good result. The staff had to dissect the grafts and place them - but the remainder of the procedure was performed by the physician. The physician was usually someone who had trained fairly extensively to learn how to do the procedure and attended conferences and meetings. Their practices grew slowly and mostly by word of mouth. Thus, if results were poor, they could correct them OR stop getting referrals. As the internet became a location to find a doctor, many doctors began getting the majority of their referrals from online sources – and the doctor with the larger budget for marketing could see a lot of patients, very early in their career and potentially before having gained the necessary experience. As the procedures increased in size, some doctors felt comfortable delegating some of the responsibilities in stick and place to their especially skilled technicians. As FUE (Follicular Unit Extraction) gained in popularity, there were many doctors in this field who did not want to perform the extractions themselves and delegated this to an individual they felt could produce good grafts.

And then…. the companies and individuals driven primarily by profit entered the field.

Interestingly, one of the first questions posed was regarding the false promotion and promises made by doctors regarding PRP. This is also an important consideration. Dr Unger, has heard everything from: “after one treatment it works forever in 99% of patients” to the other extreme of a patient having to do it “every month for a year to see results”. The latest information was presented at our workshop in Prague. The doctors with best results had several things in common: 1) they all used double spin PRP, 2) most used microneedling, 3) most used ACell, and 4) most felt 1-3 sessions was optimal followed by repeat every 1-2 years offered the best results in their patients.

The false presentation of this procedure will put doubt on all of us who perform the procedure and undermine the patients’ confidence and trust in our field.
The next post was by a doctor who had just seen a patient who had his hair transplant performed in Turkey and had developed necrosis in the recipient area. This really should almost never occur (as a doctor, Dr Unger knows never to say “never” nor “always”). One of the causes of necrosis in the recipient area is caused being over aggressive and overzealous when trying for density of sites. This is often performed by inexperienced individuals who do not understand all the factors that influence blood supply. There should be a detailed consultation where the doctor goes through a list of items regarding the patients. For example: Is the patient is a smoker? Diabetic? Do they know how to evaluate blanching of the skin or poor capillary refill? Do they pay attention when a ruddy color develops? Or do they even see them post-operatively? This is the difference between having a hair transplant with an experienced doctor or a black market operation. Some of the clinics in countries like Turkey and Iran, have 10-60 patients a day, with only one “supervising” doctor. Other clinics in Europe and the US are less extreme, but often have a plastic surgeon or dermatologist who has tacked on the hair restoration by utilizing a per diem technician and the doctor doesn’t actually know anything about hair transplant surgery.

Doctors dedicated to the ethical practice of hair restoration should stop fighting amongst themselves and focus on the real problem – the thousands of patients who will be harmed or misled by doctors claiming to perform “state of the art” hair transplant, which is always the phrase that is used. The more we encourage patients who have been harmed to stand up and tell their story, the more we will expose the bad – which must be countered with all the good results that are possible, too.

Catchy terms and gimmicks are used to reel in patients who are trying to do research: Sapphire micro FUE, DHI, ICE, nano FUE, MFUE, 4th gen FUE, ZTM, SHE, etc….. Many of these mean nothing and are at best misleading patients into thinking that the clinic is doing something different and advanced as compared with other surgeons.

The definition of a black market clinic is a clinic that operates either illegally or unethically and violates principles of proper informed consent, knowingly deceiving the patient regarding what sort of treatment they are receiving. There were many questions that were suggested to be asked of patients when interviewing such patients. Some of these include:

In your opinion do you feel you were operated at a clinic similar to the above?
What were you promised and why do you feel you were deceived?
Were you led to believe the doctor was going to do the surgical procedure and if he did not, how did you feel?
Did the doctor do the consultation and review your goals and objectives?
Did the doctor explain the risks and benefits of the procedure to properly inform you of long-term consequences?
Was there anything in the marketing or “sales pitch” that made you feel you were lied to or cheated?
How many grafts were promised/delivered and how long did the surgical procedure take?
Describe when you knew something was wrong and what led you to believe that? What led you to choose this clinic?
What kind of research did you do prior to choosing it?
What was the ultimate factor in deciding to choose this clinic?
Was it based on reputation and results or price alone?

Of course, one member pointed out, there are more gray areas. Turn-key operations popping up in the US, Australia, Canada and Europe. These are “supervised” by a doctor as the law requires, but that doctor knows nothing and cares nothing for the outcome of the surgery. FUE machines are provided by a variety of companies and many come with a technician who is “trained”. The doctor does not know about creating a natural hairline, appropriate density of extraction or site creation, or any of the other very detailed issues that HRS spend years learning and perfecting.
One doctor had just seen a patient in Australia who had been told he had 1000 grafts transplanted, by a technician not supervised by a physician, but only 208 grafts seemed to have grown. Another doctor posted photos of a woman with a donor area that had been completely decimated by FUE over-harvesting. Yet another saw two brothers with donor areas depleted by FUE and poor growth in the recipient area. For these latter patients, there are few remedies available.

It is important that all ethical HRS do their part to help get the word out to patients; to educate them and provide them with information to help them make good decisions. If there is a procedure that might help a patient, but the doctor does not perform it, the doctor should offer it to the patient and help them find an ethical doctor who can provide what they need. Just as an example, Dr. Unger met two patients recently that would benefit from hairline lowering, as opposed to follicular unit transplantation alone; so she referred those patients to a trusted doctor. Surgeons lacking experience or staff for strip harvest or FUE, should also refer to a doctor with the necessary skills and staff. Hair loss patients should have options and guidance, and ethical doctors need to continue to start getting their word out or only the Black Market clinics will be represented on the internet and social media.

Dr Robin Unger is honored to be the Chairperson of the ISHRS conference in Bangkok in 2019.