“The Resurrected Jesus Christ and Historical Followers Volume One: From Christ through the Renaissance (A.D. 1517)” from Christian Faith Publishing author Dr. William “Bill” L. Jaggar is a sweeping historical narrative that traces the growth of Christendom, beginning with the person of Jesus Christ and the Apostles, followed by the Church’s liberation through Contantine, the fall of the Roman Empire, the invasion of Islam and the Crusades, before ending volume 1 with the precursors to the Protestant and Evangelical Reformation. 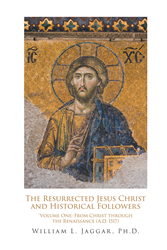 Dr. Jaggar writes, “’The Resurrected Jesus Christ and His Historical Followers’, volume 1, uses a unique approach to telling the story of history, focusing on the men and women who have shaped the Church.”

Church historian and theologian Dr. Bill Jaggar is a Ph.D. graduate in Church History and Historical Theology, having written his dissertation on Martin Luther’s theology. He draws from his vast experience as a church history professor to skillfully weave together the movers and shakers that effected Christendom’s major events and teachings. It begins with the person of Jesus Christ then traces the unbelievable and breathtaking growth of Christianity from a handful of Christ’s disciples to tens of millions over the next two centuries. The narrative then follows the story of the liberation of the Church from persecution by the Roman Empire, with the turning point of the conversion of Emperor Constantine. It continues with the Fall of the Roman Empire, as well as leaders like Athanasius, Augustine, Jerome, and Chrysostrom, through the establishment of the Roman Catholic Church under the Papacy in the West. The origin of the Greek Orthodox Church in the eastern Byzantine Empire under the Patriarch of Constantinople is examined, as well as reasons for the “Great Schism of 1054” that divided Western and Eastern Christianity.

Then, the storyline commences with Muhammad and the invasion of Christian lands, the establishment of monasteries, and the eventual response of the Crusades. Great thinkers such as Bernard of Clairvaux, Anselm, Francis, Aquinas, and Bonaventure that comprised the Scholastic movement are examined. It concludes with precursors to the Protestant and Evangelical Reformation in John Wycliffe and John Huss as well as many “biblical humanists” during the Renaissance.

Published by Christian Faith Publishing, Dr. William L. Jaggar’s new book is a fascinating intellectual journey that chronicles the ceaseless attacks against Christianity on all fronts—religious, political, sociocultural, and ideological.

Although penned at the constant request of Bill’s students, it’s a clearly written and beautiful book full of color pictures, as well as graphs, maps and charts to aid in one’s understanding of anyone. Dr. Jaggar weaves an unforgettable narrative on the long and remarkable journey of the Faith.

View a synopsis of “The Resurrected Jesus Christ and Historical Followers Volume One: From Christ through the Renaissance (A.D. 1517)” on YouTube.

Consumers can purchase “The Resurrected Jesus Christ and Historical Followers Volume One: From Christ through the Renaissance (A.D. 1517)” at traditional brick & mortar bookstores, or online at Amazon.com, Apple iTunes store, or Barnes and Noble.

For additional information or inquiries about “The Resurrected Jesus Christ and Historical Followers Volume One: From Christ through the Renaissance (A.D. 1517)”, contact the Christian Faith Publishing media department at 866-554-0919.