Drill Inc. is pleased to announce that the upcoming event, "Super Wall Art Tokyo" will be held at Marunouchi, Tokyo,during the Olympics and Paralympics Games. It will be the world’s largest mural art installation created by Artists Tadanori Yokoo and Mimi Yokoo. This program is a secret project to be announced at the end of “Tokyo Tokyo FESTIVAL Special 13” organized by the Tokyo Metropolitan Government and Arts Council Tokyo (Tokyo Metropolitan Foundation for History and Culture). https://youtu.be/39mz4Iet-N4 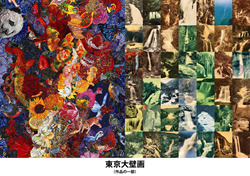 During the Olympic and Paralympic Games, in Tokyo,The world’s largest mural art installation will appear.

The walls of the landmark Marunouchi Building and New Marunouchi Building, in Tokyo are likened to a pair of canvases. So, the “Super Wall Art Tokyo” exhibition will use these to display two pieces of art with a height of approximately 150m and a width of approximately 35m. The wall art exhibition, which will have a total area of more than 7,000 m2, is unprecedented in Japan and around the world. It is a cultural monument unique to this era and area.

The exhibition period will be 50 days from Saturday 17th July 2021, just before the Olympic Games, to Sunday, 5th September, the day of the closing ceremony of the Paralympics. Tokyo, the venue of the Olympics and Paralympics, hopes the murals with their messages inspires the world, will convey the new charm of Tokyo, as a city of art and cultural.

Background of the event
This new program is designed to be the core of "Tokyo Tokyo FESTIVAL", an art and cultural festival that enlivens Tokyo, where the Olympics and Paralympics are to be held. It sprung from the idea of making the world's largest public art installation in Tokyo during the Olympic and Paralympic Games. With the games focusing peoples attention from all over Japan and around the world, it is designed as a symbol of the message FESTIVAL.

The artists
Tadanori Yokoo is a world-class artist who was part of the design team for the 1964 Tokyo Olympics and has been a leader in the Japanese art world for many years. His co-artist will be Mimi Yokoo, his daughter and renowned designer and artist. These large scale murals will be first large-scale collaboration between parent and child. They were asked to create their own art works using the same concept. Tadanori's work will appear on the New Marunouchi Building and Mimi's work on the Marunouchi Building.

The artists were chosen, with thought given to that with two paired towers as the site, artists with connections to each other such as brothers, couples, a parent and child would be ideal. Eventually Tadanori and Mimi with their strong connection to each other were chosen. Tadanori expresses the fantastic cutting-edge nature of the world while Mimi draws on the everyday carefully and petitely. The works created for this installation by two people with different worlds and expressive forms will be side by side on the two huge canvases that are in a paired relationship at the Marunouchi Building and the New Marunouchi Building.

Tadanori Yokoo
Born in 1936 in Hyogo prefecture. Artist.
Solo exhibition at the Museum of Modern Art, New York in 1972. Since then, he has continued to release unique works in a wide range of genres and is a multi-award-winning artist. His works have been stored in 80 museums in Japan and overseas and have gained international acclaim. In 2012, the Yokoo Tadanori Museum of Contemporary Art opened in Kobe and in 2013, the Teshima Yokoo House opened in Kagawa prefecture.

Mimi Yokoo
Painter.Debuted in 1994 with her father Tadanori Yokoo in a two-person exhibition “Space Yui”. In 1999, She exhibited “Ueno Royal Museum” in the VOCA exhibition 99. In 2000, she was a 2000 ISSEY MIYAKE PLEATS PLEASE guest artist. She has also participated in numerous other solo and group exhibitions.

The concept of this project
The concept of this project is “Universe COSMO POWER”. Innumerable entities make up the vast universe and continue to grow endlessly. The activity of minute life forms become energy by connecting and gathering together creating a swell that continues to grow into the future. This project contains the desire to transmit this energy, this big swell of universe life forms, from Tokyo to the world and to the future.
Based on this concept, we asked Tadanori and Mimi to create original works with themes of water (aqua) and fire (ignis) as they are the elements which form the basis of space-life. While this project was originally planned to be held in summer 2020, due to the spread of COVID-19, it was postponed for a year. Discussions continued to be held with Tadanori and Mimi after the postponement decision was made. A theme suitable for summer 2021 that embraced the energy that transcends from Tokyo to the world and from the present to the future was chosen.

Through the works of the two artists expressing themes in a pair, like the mural drawn in ancient times that transcend time and the places they were made and bring discoveries and imagination to the present day, it is hoped that this instillation can send a message which transcends nationality and time itself.

Also, as the art works can be view from various vantage points from higher or lower as well as left and right of center across the massive 7,000㎡+ surface areas, the artists have adopted a method that allows you to find different discoveries depending on where you look from.

About Drill Inc.
A creative and communication agency that solves client challenges in the most dramatic way possible. The most dramatic way is the most innovative method which produces new value in the world. We provide strategy, advertisement, promotion, contents, products, digital, events, PR and various other solutions.
Establishment:December 2004
CEO:Osamu Enari
Address:19-5, Udagawa-cho, Shibuya-ku, Tokyo 1500042
Official Website: http://www.drill-inc.jp/