Drummer-Composer Reggie Quinerly Examines His Relationship with the City That Never Sleeps on "New York Nowhere," Set for March 12 Release

After 21 years--more than half his life so far--of living and working in New York City, drummer-composer Reggie Quinerly found himself moving away with his family to Los Angeles in the fall of 2020. His reflections on his time in the Big Apple and all he'd learned and experienced there ultimately manifested in the form of Quinerly's lyrical, soulful fourth album, "New York Nowhere." 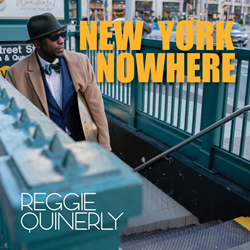 You're surrounded by eight million people [in New York City]. But everybody has their own story and everybody's living their own life with a very singular focus. So even in the midst of all these people, you're kind of completely alone. It's everywhere and nowhere at the same time.

Drummer-composer Reggie Quinerly tempers his ever-soulful postbop jazz concept with a sense of rumination with the March 12 release of "New York Nowhere" on his own Redefinition Records. The album, Quinerly’s fourth, finds him bidding farewell to the jazz capital of the world, which he called home from 1999 to 2020. Joining him for his send-off is a quintet of the Big Apple’s finest, including trumpeter Antoine Drye, tenor saxophonist John Ellis, pianist John Chin, and bassist Sean Conly.

“You’re surrounded by eight million people,” Quinerly says, describing the vibe of New York life. “But everybody has their own story and everybody’s living their own life with a very singular focus. So even in the midst of all these people, you’re kind of completely alone. It’s everywhere and nowhere at the same time.”

As he so often does, Quinerly refashions these and other nuanced perspectives on living and working on the New York scene into rousing, infectious music. Be it the sweetened bounce of “Reflections on the Hudson,” the delicate Brazilian flavor of “Celso,” or the brief but fraught theme of “New York Nights” (which is still so fully realized that Quinerly and the band can make two distinct versions of it), the drummer-composer channels all his considerable panache and creative energy into the album’s every aspect.

That includes the formation of "New York Nowhere"’s quintet, whose tight chemistry is itself another example of Quinerly’s acuity and resourcefulness. He knew he wanted Antoine Drye on trumpet, which made John Ellis the natural choice to share the frontline: “Those two go back thirty years, and I wanted to not only tap into the relationship that I have with them individually, but I wanted to highlight the connection that they have.” Similarly, filling the piano chair with John Chin automatically suggested Sean Conly for the bass. “They’ve been getting together for at least twenty years, building and playing each other’s music and stuff. I wanted that level of familiarity with each other’s playing, and I wanted them to reflect that intimacy through my compositions.”

In the end, of course, it is the players’ connection to Quinerly, and his to them, that puts the magic into "New York Nowhere."

Reggie Quinerly was born November 16, 1980 in Houston, Texas, one of the garden spots of 21st- century jazz. Fittingly, he took an early turn in that direction. Lester Grant, who played drums in the Pilgrim United Church of Christ (where Reggie grew up), was a jazz master who became the young musician’s first mentor. Grant not only taught him to play but sent him on an odyssey of discovering the great musicians of jazz past and present.

The odyssey took Quinerly first to Houston’s famous High School of the Performing and Visual Arts, then to the New School for Jazz and Contemporary Music in New York, and finally to the Juilliard School for his Master’s in Jazz Studies. There, his circle of mentors widened to include Jimmy Cobb, Lewis Nash, and Kenny Washington.

Shortly after completing his degree at Juilliard, Quinerly recorded and released his first album, 2012’s "Music Inspired by Freedmantown." It started him down a fruitful artistic pathway that has also brought forth 2015’s "Invictus" and 2018’s "Words to Love," critically acclaimed albums that helped raise Quinerly’s profile in the jazz world. "New York Nowhere" is the newest link in the chain. However, as he starts a new phase of his creative life in Los Angeles, it will assuredly not be the last.