Dubai War On The Shore 4 will be held on April 10, 2021 as an upscale dinner gala for a few privileged guests at the Arabian Ranches Golf Club. The event is supported by the Dubai Sports Council, the UAE Boxing Federation and Emaar, the largest property developer in Dubai. 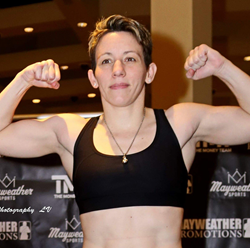 The main event of Dubai War On The Shore 4 is 5-class world champion Layla McCarter, the most dominant female fighter of her era. The undercard feature renown fighters from the international scene such as Afghanistan rising star Ahmed Samir Dawrani, Emirati Aziz Almoudi (Debut), local favorites such as Fatih “The Ottoman” Ulusoy (3-0), and Milad Saadati (Debut), the owner of the Fit Boys Gym chain of gyms, all against opponents to be announced.

With the support of the UAE Boxing Federation, Dubai Sport Council, and Emaar Properties (the owner and developer of the Arabian Ranches and one of the biggest property developers in the UAE), Dubai War on the Shore fight series is expected to continue boost combat sports, martial arts and sports activities in the UAE.

The promoters’ goal is to develop reinvigorated Dubai War On The Shore into a major UAE sporting brand to be exported worldwide. War On The Shore also is expected to be unique as opportunity to help develop the sport of Boxing in the UAE and the MENA Region as War On The Shore will be used a platform to facilitate the further development of Arab boxers in general and Emiratis in particular. The promoters, Emirates Sports and Lion Heart Boxing Productions, see the potential of the UAE as the next ‘Boxing Mecca’ and are pioneers and early movers in the space. Emirate Sports and its partner companies are the biggest sporting events promoter in the UAE and promoted some of the earliest combat sporting events in the UAE, while Lion Heart Boxing Productions is the promoter of the first live professional boxing event in Abu Dhabi history.

Dubai War On The Shore 4 will be the highlight of gala dinner for Very Very Important Persons (VVIPs) that will hosted by the Arabian Ranches Gold Club and Emaar Properties. Tables with white linen service ideally set on the Arabian Ranges Golf Club’s driving range, with unlimited food and Beverages and luxury shisha service for a privileged few and a very limited number of VVIPs (300 people) are some of the highlights of this over the top Dubai event.

The Dubai Sports Council will use the opportunity to honor deserving participants and local contributors to the Sport while the UAE Boxing Federation, a government agency and the exclusive authority tasked with the development, regulation and supervision of boxing activities in the UAE, will present two of its most promising students Farhard AlKoori (Debut) and another to be announced, to make their debut into the professional ranks.

The event is promoted by Emirates Sports, and Lion Heart Boxing Productions. In recognition of the reality of the existence of the Covid-19 Pandemic and its potential effects, Dubai War On The Shore 4 will be open to fans in a limited capacity, with all spectators remaining socially distanced using the best practices and subject to local and state health guidelines throughout the event.

Mr. Vladimir Burdun, President of Emirates Sports and the organizer and promoter of the Dubai War On The Shore 4, said: “We are the pioneers of combat sports in the UAE, and we delighted to bring back War On The Shore. Our group is the most active promoter of sporting events in the UAE and our events are renowned throughout for being spectacularly organized and entertaining. We are confident that Dubai War On The Shore 4 will be no exception. With the support of all our partners and fans, we will achieve our singular mission of making Dubai War on the Shore one of the most successful sporting series in the Middle East”.

The promoters’ goal is to develop Dubai War On The Shore into a major UAE sporting brand to be exported worldwide.