“This Is What Happened to Me” from Christian Faith Publishing author Duet Brinson is a gripping retelling of the author’s journey through his job of burning navy submarine missile compartments that resulted in his body’s multiple scars. 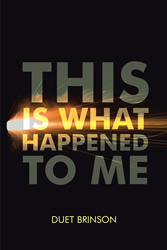 Brinson shares, “Duet Brinson wrote ‘This Is What Happened to Me’ to answer people’s questions when they see him. People often ask, ‘What happened to you?’ when they see his upper body that is covered in several keloid formations. When Duet explained what happened, he is often met with looks of disbelief and with people thinking he is crazy. Some doctors said that they don’t believe what Duet said. But Duet maintains, ‘It is the truth, so help me, God.’

“Duet wants the people of the United States to know what happened to him after completing the superior job of burning missile compartments out of navy submarines at the Puget Sound Naval Shipyard. Duet was the first person to have the experience of completing this job. The job had to be completed within the agreed upon three-month time span. Duet explains how this job has had numerous health-related repercussions not only for him but also for his family.”

Published by Christian Faith Publishing, Duet Brinson’s new book testifies to the strength and courage of one man as he faces life with resolve and purpose despite the physical mutilations that inspired skepticism and awe among the onlookers.

An impassioned masterpiece, this book seeks to reveal the honor of a man as he strives to be resilient in life while dealing with health-related issues that take a toll on him and his family that were caused by his previous job.

View the synopsis of “This Is What Happened to Me” on YouTube.

Consumers can purchase “This Is What Happened to Me” at traditional brick-and-mortar bookstores or online at Amazon.com, Apple iTunes store, or Barnes and Noble.

For additional information or inquiries about “This Is What Happened to Me,” contact the Christian Faith Publishing media department at 866-554-0919.