Scottsdale DUI lawyer, Brian Sloan of The DUI Team, has been named by the American Institute of DUI Attorneys (AIDUIA) as one of the “10 Best” Attorneys for the State of Arizona in the DUI defense practice area for 2014-2015. 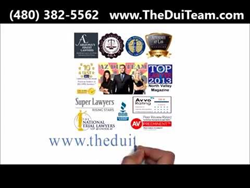 My goal is to provide intelligent legal advice to maximize the positive outcomes for my clients through a confusing and stressful time.

Scottsdale DUI attorney, Brian Sloan, Founding Member of The DUI Team, has earned recognition for the second consecutive year being named one of the 10 Best Attorneys for the State of Arizona. The DUI Team defends clients in Phoenix, Tempe, Scottsdale and the entire metropolitan area. The American Institute of DUI Attorneys (AIDUIA), an impartial third-party attorney ratings service, searches each year for Arizona’s most skilled lawyers. The organization again found Mr. Sloan among those top-notch professionals.

The selection process engages independent research only of those attorneys who are nominated by at least one licensed, practicing attorney. In addition to being approved by the AIDUIA Board of Regents, to qualify as one of the 10 Best, each Scottsdale or Tempe DUI attorney must be an industry leader who possesses top-ratings by clients and peers including a 10/10 client satisfaction rating with no negative feedback. He or she must have no bar or ethics complaints of any kind. Passing that criteria, the chosen attorney must also possess advanced degrees, be one who has attained awards, be engaged in professional associations, and have publications and speaking engagements in his or her field.

Scottsdale and Tempe DUI lawyer Brian Sloan’s nomination demonstrates both his commitment to the DUI defense field and the high level of approval among his peers. His track record of results and his proven community leadership exemplify the skills needed to secure the recognition. His “Superb 10/10” rating on Avvo.com, a professional ratings website, from both clients and peers speaks to his superior qualifications.

Brian Sloan, an experienced Tempe drunk driving defense lawyer and Founding Member of The DUI Team, writes, “It is truly an honor to receive continued recognition from the American Institute of DUI Attorneys. My goal is to provide intelligent legal advice to maximize the positive outcomes for my clients through a confusing and stressful time.” The DUI Team offers no cost consultations to people hiring an attorney so they can evaluate the case and provide reasonable expectations for the client. “When people have their freedom at stake, they should hire the best attorney for their case. That usually never means the most expensive.”

Licensed for many years, attorney Brian Sloan focuses his practice at The DUI Team solely on DUI defense in Phoenix, Scottsdale, Tempe, Mesa and surrounding areas. He has been named multiple times to the list known as “Rising Stars” by SuperLawyers.com and Top 40 Under 40 by the National Trial Lawyers Association. Attorney Brian Sloan was also named to the list known as Top 40 Under 40 by the American Society of Legal Advocates (ASLA) for 2014. “I am very proud of all of the awards I have won and the recognition I get for my work. My biggest hope is that people hiring a DUI attorney will see my accomplishments and reach out to me for help.”

The Tempe DUI lawyers at The DUI Team help those arrested for Driving Under the Influence by providing a no cost consultation to people facing charges. Arizona laws are strict and many first time offenders face mandatory jail time if convicted. To learn more about attorney Brian Sloan or the firm, please visit their website. People can also see their many positive online reviews and watch their videos. To take advantage of the no cost consultation, call (480) 382-5562 now to speak with a drunk driving defense lawyer.