Since 1977, Duke’s Chowder House has set the standard in Seattle for innovative Mixology. 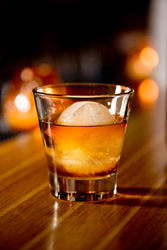 Since one can either enhance or subdue the flavor of the other, we believe that the beverages we serve are equally as important as the food.

This spring, Seattle Seafood restaurant Duke’s Chowder House will feature its 8th blended batch of Woodford Reserve bourbon whiskey for a limited time at all six restaurant locations. Back from their most recent trip to Woodford Reserve in Versailles, Kentucky, the team at Duke’s is excited to share its new blended batch of bourbon with its guests.

Taking its first trip in 2008, Duke’s Chowder House was the first restaurant in the Northwest to blend its own bourbon at Woodford Reserve in Kentucky. Since then, a number of restaurants have followed this practice, placing Duke’s at the forefront of whiskey innovation. Duke’s also selected their 2nd Woodford Reserve “Double Oaked” Single Barrel Selection - aged a 2nd time in brand new toasted white oak barrels - to be featured this spring at all Duke’s Chowder House locations.

John Moscrip, Co-owner and COO of Duke’s, comments on why providing the best quality to their customers is so important: “Since one can either enhance or subdue the flavor of the other, we believe that the beverages we serve are equally as important as the food. For both, we go above and beyond to ensure the freshness, quality, and flavor of every ingredient found in the menu. Our bourbon is no exception–which is why we travelled all the way from Seattle, Washington to the Woodford distillery in Kentucky to blend our own unique batch for our guests.”

Founder and Co-owner Duke Moscrip recommends pairing the restaurants’ new bourbon blend with a bowl of Duke’s award-winning chowder–flavored with a hint of the premium liquor. Duke remarked, “Chowder is always better with a touch of bourbon!“ In conjunction to the latest addition of its new custom bourbon to the list of fine spirits available, there’s always something new for patrons to look forward to, including the outrageous Slanted High Ball featuring the number one selling Duketail, the Bloody Bloody Mary.

With a lengthy history of continuous advancements and improvements to beverages offered, this update is just one of many in store for Duke’s extensive menu of beer, wine, and cocktails. Restaurant owners Founder and Co-owner Duke and son and Co-owner John keep quality assurance at the forefront of the Duke’s experience – from catching cod with the fishermen in Alaska to blending a custom bourbon with distillery specialists in Kentucky, Duke and John cover their bases to offer customers an unparalleled dining experience.