Local theatre company to feature productions in latter half of February 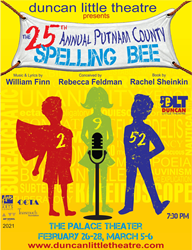 Duncan Little Theatre will bring not one, but two different shows to Duncan this season with "Little Footsteps" and "The 25th Annual Putnam County Spelling Bee!"

Join Duncan Little Theatre the weekend after Valentine's Day as they kick off their 2021 season with "Little Footsteps," a heartwarming story of a young couple becoming parents for the first time. This production will be held at the Duncan Moose Lodge, located at 1712 W Seminole Rd in Duncan on February 19th and 20th at 7:30 PM. Enjoy the story of Ben and Joanie, in their mid-thirties and married eight years, are an upwardly mobile "Yuppie" couple about to become parents for the first time. Ben (who is Jewish) works in television, Joanie (a quintessential WASP) is a would-be artist. As the play begins they are redecorating the dining room of their Manhattan apartment for use as a nursery, an activity which both underscores the impending changes in their lives and reinforces Ben's uneasiness about it. The scene is filled with funny lines as Ben tries to make light of his misgivings, but his fears lead inevitably to dispute and, by the end of Act One, Ben has departed and Joanie suddenly finds herself a single parent-to-be. In Act Two, which takes place several months later, a christening party is in progress attended by Joanie's parents, Charlotte and Gil, an affluent older couple who are not hesitant to point out that they never much cared for Ben in the first place. As for Ben, having avoided the formal christening, he now sneaks in through the nursery window determined (in a gesture towards his own religious background) to intone a few Jewish prayers over his newborn son—which, when the others suddenly return, leads both to a series of wildly funny misunderstandings, and also, in the end, a tenuous reconciliation and a commitment, by both Ben and Joanie, to try to grow up before their offspring does. Tickets are $15 for adults and $10 for students, seniors, and military personnel.

The very next weekend, Duncan Little Theatre will also present "The 25th Annual Putnam County Spelling Bee!" Performances will be held February 26-28 and March 5-6 at the Palace Theater, located at 926 W Main St. Watch the story unfold as an eclectic group of sixth-graders arrive at the 25th Annual Putnam County Spelling Bee, each eager to win for very different reasons. Sweet and shy Olive brings only her best friend (the dictionary) with her to the bee; bold and hyper allergic speller William Barfee uses his “magic foot” to propel him to greatness; former champion Chip is struggling with his burgeoning puberty; easily distracted Leaf is unconvinced that he’s smart enough to be a challenger; overachiever Marcy is disappointed by her consistent success; and politically aware Logainne Schwartzandgrubenierre only wants to impress her dads. In hilarious, touching, and catchy songs, each speller reveals his/her hopes, struggles, and passions as they make their way through the competition. Tickets are $20 for adults and $15 for students, seniors, and military personnel.

Tickets may be purchased online at https://buy.tututix.com/dlt or purchased at the door. Seats will be socially distanced and masks will be required inside the venue.