One lucky fan will win a Dutch Bros gift card covering one drink a day for a year. The contest ends Friday, Jan. 31, 11:59 PST. 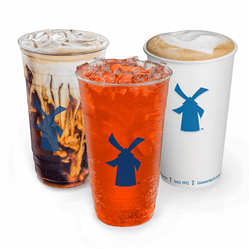 Dutch Bros Coffee is giving one lucky customer free coffee for a year!

"Dutch Bros is amping up the Dutch Luv this season by giving fans a chance to win their favorite DB drinks all year long."

Dutch Bros Coffee fans only have a few more weeks for a chance to win free coffee (or any other drink!) for a year. The contest launched Jan. 1 and runs through Friday, Jan. 31, 11:59 p.m. PST. Anyone 18 or older can enter at win.dutchbros.com.

A winner will be chosen by random drawing on Feb. 1 and will receive a Dutch Bros gift card for 365 drinks, equaling $1,733.35. Coffee fans are allowed one entry, no purchase necessary.

In addition to its mission of speed, quality and service, Dutch Bros is committed to giving back to the communities it serves. Through its Dutch Bros Foundation and local franchisees, the company donates several million dollars to causes across the country each year.