"No Death Please, we’re British" - Say 90% of the Population 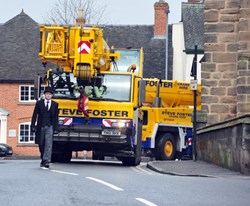 Isn’t it only natural that we should want to put plans in place; after all we spend our lives arranging weddings, christenings and parties so why not our funeral?

Although death and the subject of dying is starting to become a more comfortable topic of conversation, especially for the elderly; according to recent research conducted by The National Association of Funeral Directors (NAFD) in association with Dying Matters, a massive 89% of the population still fail to put plans in place when it comes to specifying their final wishes.

Commenting on the research, Over50choices MD Ashley Shepherd said, “It's encouraging that people are becoming more open when talking about dying but we now need to take things a stage further and get people planning, so ‘My Funeral Wishes’ is a great starting point.

The problem though is much bigger. Soaring funeral costs are having a huge impact on bereaved families across the UK. All too often people face financial hardship and as a result are making ill-advised decisions. Taking time to think about this inevitable part of life and essentially how funeral costs will be covered will relieve the burden from the people we care about when the time comes, both emotionally and financially.

The other thing to think about is age as the report states that it is the elderly who are happiest to talk about dying. Whilst this is understandable and I guess inevitable, considering almost 30,000 people died in their 50s in 2011, it does make sense to start planning at an earlier age.”

The sale of prepaid funeral plans increased by 12% in 2013, signifying the change in attitude and in the funeral industry. With the addition of new, more manageable payment options and the ability to buy online or over the phone, funeral plans are now more easily accessible and seen as a way of beating inflation by freezing funeral director’s costs at today’s prices.

The research also recognises the change in attitudes to funerals with funeral directors receiving an increasing number of more unusual requests such as wild west themes and morris dancing, a convey of cranes leading the cortege and a golfing fanatic who wanted to be buried at the bottom of his garden next to his beloved golf course.

Ashley goes on to say, “isn’t it only natural that we should want to put plans in place; after all we spend our lives arranging weddings, christenings and parties so why not our funeral? It’s our way of saying goodbye to those we care about, helping them revisit memories of a life well lived and in doing so the chance to relive happier times.”

One further interesting statistic to come out of the research was the number of funeral directors who had put plans in place. Of those surveyed, 42% stated that they had not made their final wishes known but did add that their colleagues would know what they wanted when the time came.

To understand more about "My Funeral Wishes", visit the Dying Matters website.