The Experimental Aircraft Association released its annual report on experimental category and amateur-built aircraft safety, showing that accident totals are again near record lows. This year's report, based on FAA data, continues a decade-long trend of improved safety for this segment of recreational aviation. 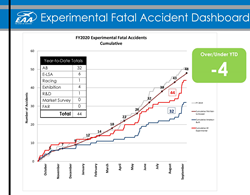 We have seen fatal accident totals drop by nearly 40 percent for both experimental and amateur-built aircraft over the past decade.

“This is outstanding news as far as the continuing trend of lower accident totals in experimental category and amateur-built aircraft, especially as total flight hours increased over the past 12 months,” said Sean Elliott, EAA’s vice president of advocacy and safety. “The FAA continues to challenge our community by lowering the not-to-exceed number each year and we have met that challenge over the past decade, as we have seen fatal accident totals drop by nearly 40 percent for both experimental and amateur-built aircraft over the past decade.”

EAA has worked closely with the FAA and NTSB on recommendations to reduce fatal accidents, including through participation in the FAA General Aviation Joint Steering Committee. Efforts have also included thousands of copies of the EAA Flight Test Manual now in the hands of amateur-built aircraft owners and the increasing use of an additional safety pilot during initial flight testing in amateur-built aircraft. Other safety initiatives ranging from regular safety webinars and the annual Founders Innovations Prize have also put the spotlight on safety for experimental category aircraft.

“While we are seeing already very small numbers, the continual emphasis on safety for all of us can never be overstated,” Elliott said. “This is a trend that must continue as we pursue ever-higher levels of safety. We must focus on training, safety enhancements, and good pilot skills to complement the ever-improving technology in today’s aircraft cockpits.”

About EAA
The Experimental Aircraft Association (EAA) is based in Oshkosh, Wisconsin, and embodies The Spirit of Aviation through the world’s most engaged community of aviation enthusiasts. EAA’s 240,000 members and 900 local chapters enjoy the fun and camaraderie of sharing their passion for flying, building and restoring recreational aircraft. For more information on EAA and its programs, call 800-JOIN-EAA (800-564-6322) or go to http://www.eaa.org. For continual news updates, connect with http://www.twitter.com/EAA.